It’s the Spookiest Time of Year 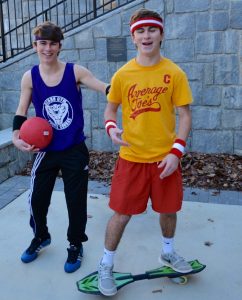 Seniors Drew and Josh Simons celebrate Halloween in 2015 by dressing up as characters from the movie “Dodgeball.”
Photo: Lee Wilson

As the leaves begin to turn and dropping temperatures start to chill the bones, the Academy knows spookiness is in the air. Halloween, one of the most popular holidays, is quickly approaching, and some in the student body already have their costumes planned. Students and faculty have a history of great costumes, such as English teacher Rick Canfield’s annual cow costume and “Dubois” of Class of 2016 paying homage to a childhood favorite movie, the cast of “The Sandlot.” The buzz on campus has begun to build in anticipation of the Pace Academy Halloween Costume Contest.

Halloween costume ideas are percolating around Pace, and the teachers seem to be as excited and creative as the students. “I plan on being myself; that will be scary enough,” said English teacher Erica Barbakow, while Spanish teacher Cappy Lewis plans on being a “bruja,” or witch, in English. “Some people think I am a witch every day, but the real spookiness will come out on October 31,” said Sra. Lewis.

Other teachers, such as English teacher Bailey Player, will continue their annual costume tradition. “I plan on being Gatsby again, which contrary to popular belief wasn’t a tradition until the last couple of years,” said Mr. Player. Some teachers plan on teaming up for the eerie holiday and creating costume partnerships, with duos like Spanish teacher Laura Agront-Hobbs and science department chair John Pearson planning on a “surprise” for the student body.

Many student costumes will represent figures in pop culture, while some will stick with the classics. “I know it’s boring, but I will probably be a cheerleader to show my Pace spirit,” said freshman Jayla Brown. Some students will throw it back, with familiar themes such as greasers from the 50’s, hippies from the 60’s and 70’s, or  neon, cheesy workout phenoms from the 80’s. Freshman Jimbo Smith and sophomore Lane Goldman plan on being characters from the 1986 movie “Top Gun.”

Other students plan on depicting modern-day figures, as Donald Trump and Hillary Clinton will be popular at the Academy. “I will be Harambe, by buying a gorilla suit, or showing love for my boy Donald Trump,” said junior Delvalo Baitey. TV characters will be fully represented on Halloween, as characters from shows such as “Stranger Things,” “Grey’s Anatomy” or “The Walking Dead” can be easily depicted for Halloween. “I think I’ll dress up as Pablo Escobar, because I love the new show on Netflix, ‘Narcos,'” said junior Shaaz Thobani.

Whether you plan on being your favorite film character or sports star, or you’re considering a Halloween classic, there are plenty of creative, original ideas to help step up your Halloween costume game.