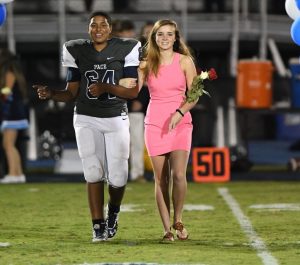 Freshmen Darren Mays and Jordan Upchurch were on the homecoming court this year. Photo: Fred Assaf

Fall at Pace brings lots of highly anticipated events, ranging from the Fall Fair to the Powder Puff football game. Homecoming weekend brings back Pace alumni and reunites them with their high school classmates. For the students, there is a big football game on Friday and the homecoming dance the following night. In previous years, Student Council has tried lots of different approaches to attract more students to the homecoming dance. Recently, the number of attendees has been low due to lack of interest in the dance. Many upperclassmen choose not to go because it is “boring” or “awkward.” Some attempts to increase the crowd include having a professional DJ and making the dance shorter. This has had varying results, with last year drawing bigger numbers.

This year’s dance brought out a large crowd. This could be attributed to the fact that there was a professional DJ and the ability for students to request their favorite songs. In past years a student DJ from Pace was used, which saved money. However, professional DJs allow the students to recognize that the dance is a big deal.

There has been lots of debate lately over homecoming asks. Many students at other schools such as Lovett and Westminster ask dates to their homecoming dance. Some students at Pace want to make this a tradition. Head of Upper School Michael Gannon is strongly against this out of concern for the freshmen. He believes that they won’t have anyone to ask because the dance is so early in the year.

Asking to homecoming is a risk-reward situation. Making homecoming an “ask dance” could discourage people who do not want to ask others to go. On the other hand, it might increase attendance among those who think that the dance is “lame.” The Pace Student Council ultimately decided not to have homecoming as an ask dance this year. Asking would have only been allowed for juniors and seniors, who have PDC and Prom in the spring, and three couple dances might be a little much.

Students have made other suggestions like moving the dance off campus or to a different location at Pace. Some options considered include Knights Hall in the Middle School or Boyd Gym. However, I think that the FAC is a good place because it allows for ample space to dance without it being too big, like Boyd Gym would be.

I think that the homecoming dance is effective and draws a good enough crowd the way it is. Obviously, the school cannot force students to attend the dance. Still, there are definitely improvements that could be made that the Student Council and faculty should take into consideration in the following years.