Freestyling His Way to Fame: The Legendary Jeb Carter 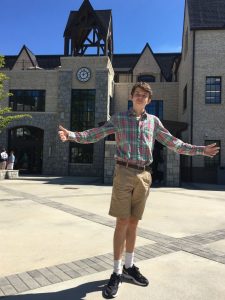 Eyes wild with curiosity, hair still slightly disheveled from last night’s rigorous homework grind, junior Jeb Carter manages to maintain a cool, calm and collected presence as he steps into the third floor Woodruff Library study room. Carefully pulling his seat out from under the table, we make eye contact as Jeb flashes his famous boy-next-door grin. There is a swagger to his step this morning, a newfound confidence unlike I have seen in previous years.

As if the scholarly teacher’s son turned golden boy could not have gotten any more warm and friendly, it appears as though he’s now adapted his stage presence to the boisterous halls of the Academy. Many attribute it to the skyrocketing of his music career during Freestyle Fridays, while others who know him personally disagree by saying this is merely Jeb’s personality. He is a character. Fumbling with my pencil, I prepare myself as I align my questions for Jeb. There is so much to ask, and yet so little time. But I stick to the one question we’ve all been pondering: How does a theater enthusiast find himself lonely at the top?

Reviving a tradition that many thought the Class of 2016 put to rest, Jeb Carter has bewildered audiences with his surprisingly soulful lyrics. Even when faced with adversity, most significantly junior Jonathan Tennies’ feeble rap battle, Jeb has laid the competition to rest. What at first seemed as though it was a one time stand-up has now become a widely anticipated milestone of the week. A young man who originally was just another one of the juniors has transcended to a school-wide name. Jeb humbly credits this success to Pace alum and former freshman peer leader, Elijah Holifield.

Inspiring Jeb’s affinity for rhythm and rhyme, Elijah left behind a new standard for Freestyle Fridays at the Academy upon graduating in 2015. Reflecting on their peer leadership sessions, Jeb says that he “always looked up to him [Elijah].” Jeb also paid his respects to Class of 2016 alum Timothy Coleman III, acknowledging his notable rap career. Nevertheless, Jeb calls Elijah his “freestyling role model.”

Another key component of his improv dialogue is his background in theater and extroverted nature. “I’m definitely not afraid of embarrassing myself,” he said. “I guess my theater experience gives me confidence when I’m standing in front of a big crowd.” Confidence has proven to be Jeb’s greatest asset, as many of the high schoolers are far too timid to even stand up. In order to maintain an attention-worthy stage presence, Jeb channels his inner actor, taking each Friday on as if it were a role.

Outside of the FAC, Jeb can be found on the playbills of local theaters. His favorite role was starring in “Peter Pan” at Fabrefaction Theatre in April 2015. Jeb’s fun-loving, extravagant nature paired perfectly with the romanticized boy character, and his performance garnered him city-wide praise. Beyond acting, the multi-talented artist has a full résumé that includes singing and playing piano. But it is his gift for rapping that has drawn local attention. How long will this new dynasty last? Is Jeb Carter truly the new king of Freestyle Fridays?

It’s hard to tell the extent of a star’s career when they have just taken off, but for Jeb Carter there truly is no limit: “I’m going to go wherever the current takes me, but I don’t have anything special in mind, because no one knows what the future holds.”