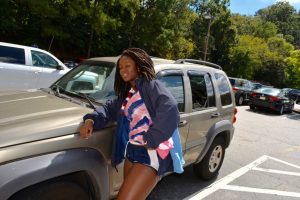 KN: I hear that you dance. Where do you dance?

IO: Where? My bedroom and my kitchen.

KN: How long have you been into dancing?

IO: My brother is trying to make it big in the “dance world” right now. I’ve always liked musical theater dance, but I got into hip hop dancing probably three or four years ago.

IO: Yes. I would like to learn other styles, but it’s too late for me.

KN: What has your experience been in the Pace theater program?

IO: Um… Well, freshman year it was amazing because I always did cheer along with musical theater. But last year when the new director came, I had to choose and I kind of chose cheer. So I was not really in the musical, but I was in the musical. I was in like two dance numbers for the entire thing. This year, I finally actually had to choose, so I chose musical theater. I can see myself doing that in college or like getting scholarships for it so…

KN: What is your favorite song to sing?

KN: Do you also like to dance to that?

KN: Where do you find yourself singing most?

IO: I find myself singing in my mom’s bathroom because the acoustics are the best in there.

KN: What are a few adjectives your friends would use to describe you?

IO: Hot mess. Free spirited. Young, wild and free… But I can actually get serious and I’m caring and loyal.

KN: When and where are you most comfortable?

IO: Um… I’m probably most comfortable on stage, either dancing or singing or even in a play.

KN: How do you spend your free time?

IO: I’m an internet enthusiast. I believe it’s there so we can use it, you know? Haha. I do my homework, of course. But I’m always reading online and looking for new music types. As an artist you can’t just stick to one genre. I spend a lot of my time working out, but like, lazy working out. And I eat a lot.

KN: Is there anything else you want people to know?

IO: I am seeing Beyoncé on Monday [Sept. 26]. She is my spirit animal.