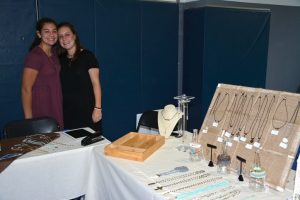 Entering its 53rd year, the Pace Fall Fair brings lots of anticipation for many students and families at Pace and the Buckhead area. However, this excited group seems to exclude Pace upper school students.

Being a lifer at Pace, I grew up waiting for the Fall Fair to arrive each year. I never had to wait in the long lines for my favorite attractions which included bungee jumping and the haunted house because I made sure to wake up extra early so I could be the first one there. As I grew older in Lower and Middle school, I loved walking around with my friends and shopping at the street market.

Flash forward to my past two high school years, and the fair has been something that I forget until the week of. I went to the Fall Fair my sophomore year to help out at the haunted house. Now, with the fair two weeks away, I, like many other high schoolers, am seriously debating whether I should even go to the fair or not.

The Fall Fair has activities that are more aimed towards younger kids rather than high schoolers. Although lots of attempts have been made to increase the number of older kids who go to the fair, such as providing service hours and shopping opportunities, the numbers in recent years have been lacking.

The Fall Fair is focused more on attractions such as inflatables and sports for younger kids; high schoolers simply don’t find much amusement in karaoke or the MASH tent where kids receive a fake cast. New attractions this year include human Hungry Hippos and more giant slides, which doesn’t give teenagers the wow factor that it is intended to.

Despite that, I still think that the fair is an amazing event for younger kids and is something very memorable for them. In the Lower School, the teachers and Fall Fair moms do a skit in a big assembly and have a raffle. The fair gets lots of hype in the Lower School and efforts such as dress down days to promote the fair have also been made in the Middle School.

There are two possible options for future heads of the fair. First, they could focus it almost completely on the little kids and accordingly have a greater number and better quality attractions for them. In doing this, the parents in charge would not have to spend too much of their budget on attractions for older kids and instead could hone their focus on what the lower and middle schoolers like the best.

On the other hand, there could be a group of high schoolers who help plan the fair and think of attractions that would draw a bigger crowd of upper school students. For example, having good live music and creating incentives to go to the fair itself would help with the fair’s turnout of teenagers. This could increase the Fall Fair attendance by older kids and potentially increase revenue for the fair as well.