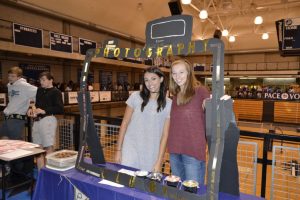 With the start of every school year comes Club Fair, and with that comes the return of favorite old clubs and interesting and fun new ones. On Friday, Sept. 16. upper school students poured into the Inman Center for Club Fair, run by Pace Student Council. Like a centipede, the student body slowly crawled through Inman to check out display tables, a long and arduous affair. “Club Fair is fairly well run considering how chaotic it could be,” said junior Jackson Fuller. “It’s definitely one of the most interesting and looked-forward-to experiences of school.” Many students were very pleased with some of the new clubs, which appealed to their many varied interests.

Students who enjoy shooting guns now have Paintball Club as an option, along with the older Shooting Club.  Students who enjoy anime now have an Anime Club to watch it with others. Some clubs are opening up new possibilities for service, such as the Universal Language Club, started by junior Sam Delman. In this club, students help out the community by playing soccer with Syrian refugee kids. New opportunities also include everything from going to Willy’s and mentoring middle schoolers in “Way Pay Days” to making explosions with Ms. Hall in Chemistry Club.

A dream shared by students can become a permanent fixture at Pace. “Judging from the sheer numbers of sign-ups, I know this club will leave a legacy that future generations of students from both Pace and fellow schools will look to for inspiration,” said senior Prashanth Kumar. Prashanth started Chopped, a club where students cook or bake competitively. To form a new club, one must turn in the club form, have a faculty member sponsor it and have people sign up for it. Since these qualifications are pretty easy to meet, almost any idea can become a club.

Many Pace faculty members are excited to be involved with clubs, like Spanish teacher Dra. Pontes with her Disney Club or English teacher Bailey Player who will be listening to the musical “Hamilton” during break in Hamilton Club. “The Hamilton Club is the greatest club ever created and I am honored to be its founding faculty father,” said Mr. Player.

It’s not too late to get involved with a club. Any students who wish to can email club leaders to join in on the fun.