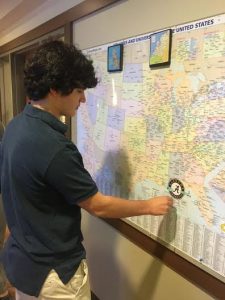 Senior Caleb Levin puts his flag on the map indicating that he will attend The University of Alabama. Photo: George Shepherd

What does all this mean? Students who apply “early decision” have a binding application, which means if the applicant is accepted, he or she must attend that institution and withdraw the remainder of his or her applications. Therefore, students can only apply early decision to one college, knowing that the college is their top choice. Colleges tend to lower the qualifications of students who apply early decision compared with those who apply regular decision, because admissions officers know their school is the applicant’s top choice.

Students who apply early action, which is different than early decision, find out whether they are accepted to, deferred or denied acceptance to that college earlier than the regular deadline applicants. If accepted early action, they can still apply to and eventually attend other colleges. If waitlisted, their application rolls over into the general application pool.

“The sky’s the limit for me,” said senior Will Movsovitz, who has applied early action to five colleges, including University of Michigan and Tulane. “Getting into a college early will take a lot of weight off my shoulders academically and in the college process.”

The early admission process serves as a game changer for seniors, because they can find out early in their senior year – typically before or during winter break – where they will attend (or have the option of attending) college. For early admission applicants, colleges do not look at grades from senior year, but instead strength of schedule; therefore, grades from second semester of students’ junior year are vital.

Seven Pace students have already been accepted to The University of Alabama. “It was a super easy process and I heard back within two weeks,” said senior William Robbins. About 95% of Pace seniors will apply early action and 30% will apply early decision. “The early application process really speeds things up for the college process,” said college counselor Amy Secor. “We provide essay writing workshops during the summer, so rising seniors write good college essays before their senior year starts.”