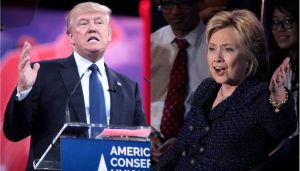 As November approaches, the presidential election is impossible to avoid: on signs in your neighborhood, as magnets and stickers on cars, and clogging up your Facebook feed. The 2016 election is not exactly like its predecessors as a passing trend of conversation; It serves as a turning point in the history of the United States.

Leading candidates Hillary Clinton and Donald Trump have attacked each other on any number of issues, and there is plenty of material given some extreme policies and shady activities. For example, Trump’s controversial “wall” proposal threatens not only to isolate the United States from Mexico, but also to alienate a significant number of Americans (or at least current residents of the country). He has been called a racist, white extremist, nationalist and countless other names. However, Clinton has also drawn unwanted attention through her questionable actions involving her private email server and the Clinton Foundation.

Beyond the Democratic and Republican candidates, there are alternatives such as Gary Johnson representing the Libertarian party and Jill Stein representing the Green Party. However, neither of these independent parties have gained enough support to threaten the two major parties. The nation already seems to be divided between right and left, which leaves many questions about the future of American politics unanswered.

Here is where the two leading candidates stand on current issues, according to the candidates’ campaign websites:

On abortion: Donald Trump is pro-life and intends to restrict abortion procedures by banning them with a few exceptions, such as rape, incest and danger to the mother’s health. Trump also plans to stop funding Planned Parenthood. Hillary Clinton is a full supporter of Planned Parenthood and wants to ensure that all women have access to safe and legal abortion. She does agree with Trump on limiting late-term abortions.

On gun control: Trump wishes to protect gun rights in the U.S. and believes that the national right to carry should be legal in all 50 states.He maintains that “government has no business dictating what types of firearms people are allowed to own.” Clinton wants to reinstate the assault weapons ban and expand background checks to the sale of guns at gun shows and on the internet. She believes that individuals on the FBI watch list for suspected terrorist links should not be allowed to purchase guns.

On LGBT issues: Trump opposes same-sex marriage and would nominate justices for the Supreme Court committed to overturning the ruling. He also supports recent state legislation requiring transgender individuals to use the bathroom of the gender on their birth certificate. Clinton is in full support of same-sex marriage, although she has opposed it in earlier decades. She will work with Congress on passage of the Equality Act to protect people from discrimination on the basis of gender identity and sexual orientation.

On climate change and environment: Trump does not believe in climate change, which will prevent him from making some restrictions on drilling and usage of resources. He is interested in energy-efficient solutions, but would only take these measures if they were financially sound. Clinton views climate change as a threat and intends on responding to the issue. Part of her plan involves restricting oil drilling and employing more use of renewable energy.