BITTSM not Bad, but no Rodeo

Houston rapper and auto-tune addict Travis Scott drops his second studio album, Birds in the Trap Sing McKnight, following up on 2015’s Rodeo. Rodeo was an anthem for 4 a.m. partiers – a dark, melodic trap offshoot with biting production and themes of debauchery – and one of my favorite records of the past five years. Travis’ latest project isn’t bad, but it’s no Rodeo.

It’s overly safe; songs are recycled, production is boring and there is no risk taking. Even if there aren’t many really bad songs, there are an equally low number of really good songs.

Travis is defined by production, which is partly why Birds doesn’t live up to my expectations. Where Rodeo shined in its codeine-drowned, razor-edged production, Birds feels like baby lotion trap. For example, “through the late night” tries hard to give the nocturnal vibe of Rodeo, but comes off as artificial. With help from a poorly harmonized (and perpetually declining) Kid Cudi, Travis is obviously avoiding describing his late night antics by incessantly repeating “through the late night,” a boring alternative to storytelling.

This laziness manifests itself in many different ways outside of production. First, the album isn’t cohesive. The first seven tracks have the same “Night Show” vibe of Rodeo, and the final seven have a summer-anthem style production with over-produced steel drums and upbeat instrumentation, and Travis makes no attempt at transitioning between the two. I can’t tell if Travis is trying to have a feel-good summer album or an unholy, Halloween-style record like Rodeo. If Travis would have picked one of these themes, the record could be another masterpiece like Rodeo.

Second, the two biggest hits on the album have been released for months. “pick up the phone” has been out since June and “wonderful” has been out since January, showing that Travis didn’t really try to create a refreshing, new project, but simply collected his Rodeo B-sides and called it an album.

Finally, there’s no edge to the album. Rodeo had standout hits like “3500” and “Antidote,” but it also had a deep track list with songs like “Nightcrawler,” “Maria I’m Drunk,” “Oh My Dis Side,” “Pornography” and “Apple Pie.” Birds doesn’t have the stand out bangers, or the artful trap melodies that Rodeo did.

There are also a few tracks that are so offensively bad I have to mention them as substantially bringing down the overall quality of the album: “guidance” – Travis’ voice isn’t accustomed to beats as fast as this one, and as a result his flow gives off the impression that he’s off beat (through choppy, lazy bars that don’t line up with the production).

What I Liked About the Project: Travis again shows his ability to coordinate features that feed off of the energy of each other and the beat. There are a fair number of tracks that illuminate this point:

“the ends”: Andre 3000 drops another great 2016 guest feature. The energy of his rhymes and his strict discipline of staying on the topic of the song give the album a hook (and a hot start).

“outside”: 21 Savage jumps on the track and brings an interesting change of pace, with a nonchalant delivery on hard-hitting topics that gives the listener the impression they shouldn’t mess with 21. This style is the kind of artistic growth that I would have expected from Travis. On Rodeo, Travis features a similar verse from Chicago rapper Chief Keef, and 21’s feature reminds me of a more updated version of Keef’s guest appearance.

“goosebumps”: Kendrick Lamar can do no wrong. Unparalleled energy in his unique and always shifting delivery gives Kendrick the biggest range in rap and solidifies him at the top of the game, and “goosebumps” is no exception.

“pick up the phone”: my favorite track on the record (although Travis is barely on it), and maybe my favorite track of the summer. Quavo and Young Thug hop on the track, delivering their usual quirks, and I buy it. Quavo, with his distinctive voice, 3 round burst-style delivery and auto-tuned crooning, make him one of the most addictive rappers to listen to. Young Thug, rap’s most eclectic character, also bursts with energy and melodic singing on the track’s chorus. A combination of these two Atlanta rappers makes this track truly addictive.

This EP feels like it should have been Travis’ first studio album, which he would have followed up with a more cohesive, impressive, re-playable Rodeo. Everything that Travis did on Birds, he did better on Rodeo. Rodeo transported me to Travis’ world of sin: like I had front row seats to a movie about Travis’ youth and his drug-fueled insanity through a depiction of his “Night Show” parties; Birds is like the deleted scenes of that movie.

Best Songs: “pick up the phone,” “goosebumps,” “the ends,” “outside” and “wonderful”

Worst Songs: “beibs in the trap,” “guidance” and “first take” 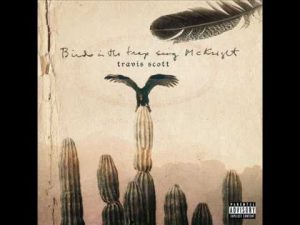