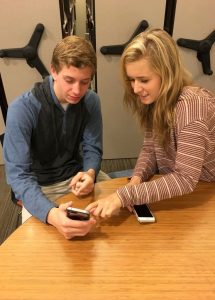 Around the world, savvy smartphone users anxiously awaited the release of the iPhone 7 on Sept. 7. Since 2007, radical technology from Apple has been taking the world by storm, with the company releasing 13 different iPhone models prior to the release of the iPhone 7 and 7 Plus. The iPhone 7 offers an enhanced camera, a more immersive stereo, a display with astounding resolution, and much-needed water resistance. “It has a new home button which is so much more fun to press,” said sophomore Devan Johnson. “Also, the new camera is actually two cameras in one, which is incredible. My pictures have so much more definition.” The new camera ameliorates the pixel count, flash and even the FaceTime camera.

According to Farhad Manjoo, tech writer for the New York Times, the iPhone 7 goes beyond simple water resistance. Farhad tested Apple’s claim by fully submerging his new phone in a pitcher of water. In the video Farhad posted on FaceBook in September, he FaceTimes the phone while it is immersed and receives astoundingly clear sound and picture. Offered in the colors of silver, gold, rose gold and the latest black and jet-black finishes, the phone has a new, modern look. The face lift also includes a reconstructed home button and a seamless, glossier design.

Part of the Apple motto is to always be innovative and revolutionary, and in the past this has been true. Accordingly, the headphone jack is no longer on the iPhone at all and is “obsolete” with new Apple AirPods. Resembling Apple’s earbuds from the previous years, AirPods are the white consoles at the top removed from the cumbersome cords. These are wireless and use bluetooth, and are equipped with Siri and their very own cellular signal. “I think the lack of a headphone jack is stupid,” said senior Mitchell Zwecker. “Apple just wants you to only buy their headphones so they can make money. I miss Steve Jobs.”

Preceding the release of the iPhone 7, Apple’s biggest competitor, Samsung, started selling the Galaxy Note 7. Also highly anticipated, the Note 7 has very similar features to the new iPhone. Both have sleeker designs, better cameras and water resistant bodies. However, the Note 7’s batteries recently proved to be deficient and have already caused multiple serious burns and fires. On Sept. 13, a Note 7 exploded and engulfed a car in flames on the street.

Interestingly, there are many reports of a hissing or buzzing sound behind the Apple logo inside the phone, which could indicate a malfunction in the future as well. “It’s just not that different from the past iPhones,” said junior Zack Leven. “They basically copied everything Samsung made better.” The display is improved, the camera is augmented and the apparatus is water resistant, exactly like the Galaxy Note 7. Although the iPhone 7 has new software and various improved features, it fails to introduce any new concepts.