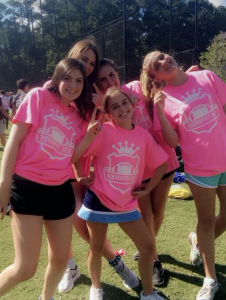 Junior girls prepare for their game against the seniors. Photo: Jordan Shoulberg

On Friday, Sept 23 the high school student body surrounded the lower fields, as the high school girls prepared, awaiting the commencement of the annual Powder Puff games. To start off the games, the sophomores and freshmen proudly took the field. Both Kayla Ross and Jenny Luetters scored for the sophomores, earning a win by defeating the freshmen 14-7. “Their defense was really good,” said sophomore Joe Hirsch. “There were some interceptions and great blocks.”

The frightened freshmen, whose only touchdown was made by Maya Kaplan, walked sullenly off the field as the sophomores roared with celebration.“That was easily the most intense game I’ve ever played,” said freshman Jordan Upchurch after her Powder Puff debut. Although a low scoring game, it was a game filled with much aggression from both teams. “That game was definitely more fun than our game against the Class of 2018 last year,” said Kayla.

In the juniors versus seniors battle, the seniors crushed the juniors, physically and mentally. “The seniors were definitely killing it,” said senior Sari Leven. The juniors were distraught as senior Samantha Moreland ran into the end zone early on in the first half. The seniors then pounced on a special teams mistake made by the juniors, resulting in another touchdown. “The juniors gave a good effort but they just fell short,” said junior Harrison Lewis. “It was still really fun to watch, though.” Similar to last year, the juniors couldn’t score a point, resulting in a 14-0 win for the senior girls.

The Powder Puff  games officially ended with everyone enjoying the Student Council-sponsored ice cream truck down by the fields, and each grade already talking about strategies for next year.