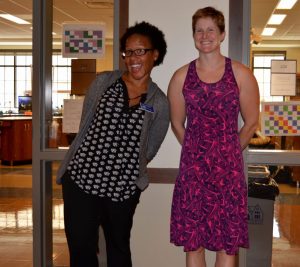 With the new school year comes new faces, rules and improvements. Some of these new faces include new upper school faculty members Meredith Carpenter, Kaylan Haizlip, Helen Hathorn and Diana Memar. These teachers have come from near and far to teach at Pace, and they are already loving their time here.

Coming from Baltimore, Mrs. Hathorn was looking for a job in Atlanta after her husband interviewed at Westminster and eventually accepted the job as a French and Latin teacher. She stumbled upon a website that said Pace was looking for a part-time French teacher, and scheduled an interview with Head of Upper School Michael Gannon and Head of School Fred Assaf. “I have never laughed in an interview as much as I did in my interview for Pace,” said Mrs. Hathorn. “As soon as I walked in I already felt comfortable with them.” She taught a class for French teacher Nancy Robinson, and immediately fell in love with the atmosphere and students at Pace.

Mrs. Hathorn has previously worked as a tutor and a teacher. She received a bachelor’s degree from the University of Notre Dame and a master’s degree in French Literature from Indiana University. Her love of the French language continued as she spent a year as a Fulbright Teaching Fellow in Dijon, France.  She is currently teaching French I, French III and French IV. “Sometimes, I accidentally speak in English, but I know I need to stay in French the whole time,” said Mrs. Hathorn. “I am improving each day, just like my students.”

Coming from Milton, Massachusetts is science teacher Ms. Carpenter. Ms. Carpenter earned two degrees from Stanford, including a master’s in marine molecular biology. She previously taught science at a boarding school in Massachusetts, and decided that it was time for a change in perspective on education. “Some things are different here, but the overall student body is similar,” she said. Ms. Carpenter is currently teaching Honors Biology and Anatomy/Physiology. Her favorite part about biology is that she can create labs and activities to help bring relevance to the topics. “I am working on staying consistent between my various bio classes, but I want each class to have its own character,” she said. Ms. Carpenter worked as a deckhand in the central Pacific, led white water rafting trips in Wyoming and was a paramedic in Boston before teaching.

Dr. Haizlip is the new AP Bio teacher. She earned her bachelor’s and Ph.D. from Ohio State University. She heard about Pace through a recruitment firm, and Pace fit her qualifications for a desirable school. Dr. Haizlip has guest-lectured and served as a research associate at the University of Colorado at Boulder, but she likes Pace better. “Pace is more of a family and the students make it even better,” she said. The double period system at Pace is definitely a new concept to her, but she knows that it is necessary in order to complete the required curriculum. She enjoys hanging out with the students, which makes the double periods go by faster. Her favorite chapter to teach is genetics, which her students will learn later in the year.

A cum laude graduate of Vanderbilt University, Mrs. Memar is not a completely new face to the Pace community.  She taught for a semester as a substitute math teacher in the trailers in spring 2014. This year, however, she has a more permanent teaching role in AB Calculus. “I like having my own classroom and being able to teach in my own way,” said Mrs. Memar. “I feel more ownership in the success of my students.” She previously taught at Centennial High School and at Lovett, where she says that the students and faculty have a lot less freedom than those at Pace. “Everyone is self-motivated and makes good choices,” said Mrs. Memar. She currently has a daughter in second grade and a son in fourth grade at Pace.