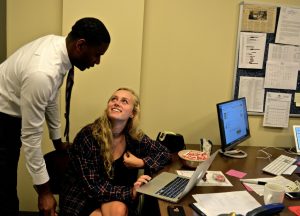 In the spring of 2016, college counselor Lee Nuckolls announced her departure from Pace Academy. The mountains were calling her back out west, and it was time for upper school students and staff to say goodbye. Seniors who previously had Ms. Nuckolls as their college counselor were reassigned to Amy Secor or Gavin Bradley, Ms. Nuckolls’ colleagues. But before the end of the school year, Mrs. Secor and Mr. Bradley introduced the newest member of Pace’s college counseling office: Jonathan Ferrell.

Mr. Ferrell did not always plan to become a college counselor. In fact, his path was headed towards law school. “I had been accepted and was getting ready to go,” said Mr. Ferrell. “At the last minute I thought, ‘I don’t know if I love this enough to spend the time or money that it takes.’” Because of these doubts, the Director of Admissions at Millsaps College – who was his boss when he worked in the Admissions Office as an undergrad tour guide – invited him to stay and work for a year to think about his decision. “Eleven years later, and I’m still working in this field,” Mr. Ferrell said.

According to Mr. Ferrell, working at Pace differs from working at Millsaps mainly because of the more constant interaction with students, which is what he is most excited about. “When I was at Millsaps, I had to know all things Millsaps,” he said. “Whereas, in this role, because [the seniors] are applying to so many places, I get the opportunity to know so much about more schools. I think that will be fun.” Mr. Ferrell believes the most challenging part of his job will be getting the parents comfortable. He realizes that it may be discomforting for their student to be paired with “the new guy,” but he is confident that once they get to know him, they will be at ease.

Mr. Ferrell considers himself “lucky” to work at a school like Pace. “I went to a public school in Texas, and it was not a bad school,” he said. “I brought my friend from high school here when I first got here, and he was like ‘Are you kidding me?’ It’s so far from where I went to school, but I think it is so amazing.”

The Pace community has been incredibly welcoming in Mr. Ferrel’s eyes. He and ICGL Director Trish Anderson are the official advisors for Pace’s Gay-Straight Alliance (GSA), and he has even been asked to be the male chaperone for the ICGL trip to Budapest with history teacher Helen Smith in November.

In math teacher and dean Krista Wilhelmsen’s freshman Transitions class, with which he is assisting, Mr. Ferrell blew the group away in the game “Two Truths and a Lie.” His two truths and a lie were: “I am 35 years old, I have sung at the White House, and I tried out for “American Idol” and made it to the round before the televised round.” The lie? He is not 35.

Mr. Ferrell’s hidden talent is his voice. He began singing in church as a child, and he has continued ever since. His sister convinced him in American Idol’s younger years to audition. “What you see on TV is magnified,” he said. “It is like hundreds of thousands of people outside in this long line. People are out there singing, and people are dressed up in costumes.” His sister who convinced him to audition was by his side through the whole process, and he made it to the round right before singing in front of Simon Cowell.

If you see Mr. Ferrell in the hallway, do not be afraid to strike up a conversation; maybe he will even sing a few bars.