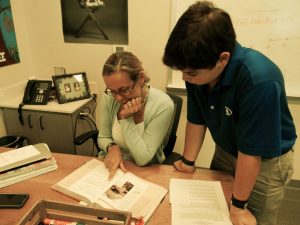 Thomas Hattori, former dean of the Class of 2017, departed The Arthur M. Blank Family Upper School at the end of last school year after accepting a job in California at the Thacher School. Moving to California brings him closer to his family, which was very important to him. Head of Upper School Michael Gannon initially thought the new 12th grade could get through the year without a dean.

In previous years, seniors have mostly relied on their college counselors for guidance, therefore Mr. Gannon believed that Amy Secor and Gavin Bradley could serve in place of the senior dean. But after the passing of Parker Berman and Stephen Walker, he felt that putting a new dean in place would provide the additional support the grade needed. Mr. Gannon called math teacher Krista Wilhelmsen over the summer to ask her to step in as the Class of 2017’s new dean.

“I was relieved because I felt and knew the class needed a dean,” said Mrs. Wilhelmsen. “I’m glad he asked because if he didn’t, I would have asked him anyway. Not one part of me was hesitant to step in.” She knew she had enough experience and already felt so close to the grade. She was excited to help. English teacher Rick Canfield thinks that Mrs. Wilhelmsen is more than qualified for the job. “She was a dean for a very long time, so I think she’ll do a great job,” he said.

Mrs. Wilhelmsen came back to Pace in 2012 after previously teaching at Pace from 1995 to 2007. She served as a dean for the classes of 2003 and 2007 and was a recipient of the Kessler Award for Teaching in 2006. Mrs. Wilhelmsen has bachelor’s degrees in sociology and math from Bowdoin College. “Even though I’ve only been in high school for a short while, I can already tell Mrs. Wilhelmsen will be a great teacher,” said freshman Meryll Asher. “She’s already made me feel so much more comfortable in the high school.”

Seniors seem enthusiastic to have Mrs. Wilhelmsen as their dean. “I’m very excited because she is so sweet, and in ninth grade, she was a great teacher,” said senior Ross Cefalu. “I could not have asked for a better person to be our dean. Everyone adores her.”

The senior class began the school year with a rafting trip on Aug. 18. Upper school faculty thought it was great way to bring the grade closer together, and Mr. Gannon was very pleased with the outcome. “[It was] a day together to enjoy themselves and have fun since all their sadness,” said Mr. Gannon. Mrs. Wilhelmsen also had a great experience on the trip. “It was an amazing and perfect day,” she said. “It was exactly what we wanted it to be, and it was a chance for everyone to be happy together and to interact. The weather was perfect. It was scary, exciting and just awesome. We had an all-around perfect day together.”