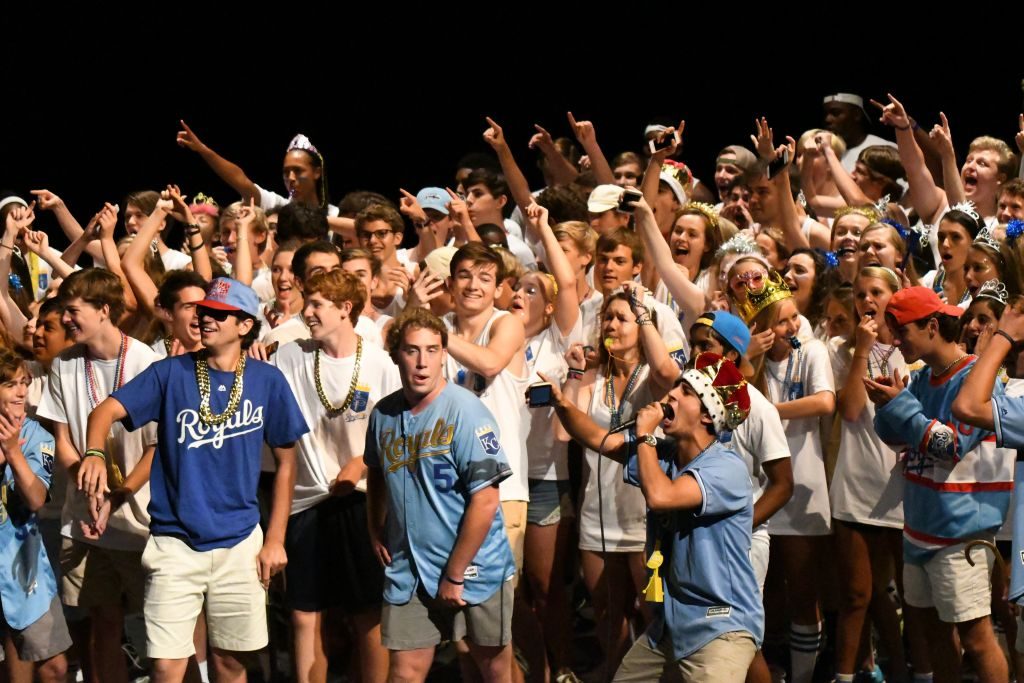 Seniors Brian Sloan (R) and Ben Siegel (center) took the ‘mic with the senior class at their back to welcome everyone back. Photo: Fred Assaf

Signaling a new school year, the FAC filled with shrill whistles and toilet paper on Aug. 17 as the Class of 2017 stormed in, celebrating the beginning of their senior year. As the Dark Knights have risen and fallen, a new reign of Roya17y at Pace has begun. The step up to the new role of being seniors still hasn’t fully dawned on most of the class. “I’m excited for senior year, but it’s weird that we’re finally seniors,” said student body vice-president Mary Brooks Perkey.

After Pace Academy legend Tommy Hattori took his talents to California, the position of Class of 2017 dean was vacant. Upper school math teacher Krista Wilhelmsen came out of dean retirement (former dean for the Class of 2003 and 2007) to take the reins for the Class of 2017. “I had thought about being a dean again, but with my son at  The Schenk School it was too much back and forth,” said Mrs. Wilhelmsen. “Now was a great time to take responsibility for this awesome class.”

The student body is led by senior student body president Christopher Howard. Taking the gavel from Mark Handler ’16, Chris steps up with experience in abundance. “This is my fourth year of Student Council, so I will use my experience to lead this school,” said Chris. “We are underestimated as a grade, but I know we will succeed in leading the school.”

Roya17y runs throughout the grade in many forms, ranging from Orkin Scholars to volleyball standouts. With many active community members, including Prashanth Kumar being named a member of Atlanta’s 20 Under 20 for exceptional service, the grade leaves its mark in many areas. Along with Prashanth, the grade includes twenty-eight service leaders, who volunteer for projects such as the Atlanta Community Food Bank and Habitat for Humanity.

Seniors such as Willie Lieberman and Mitchell Zwecker stand out amongst an elite group in the performing arts. The Class of 2017 brought home multiple state championships from the GHSA State Literary Meet. Avery Herman won a championship for his essay, while Willie and Ellie Duncan were state champions for trio along with Lexi Rubin ’16.

Meanwhile in sports, the new seniors excel in multiple areas. Five athletes have already committed to high profile Division I schools and there will be many more to come. The top talent includes Deon Jackson and Summer Brown heading to Duke University for football and volleyball, respectively. The grade also has two football players committed to University of Georgia, Trey Blount and Andrew Thomas.

Along with the talent on the fields, the Class of 2017 contains the #3 player in the ESPN 100 for basketball, Wendell Carter Jr., who is still undecided on where he will attend university. With the senior class helping to win two state championships in 2015-2016 and contending for many more, the new school year is promising for athletics.

The talent in the classroom, on the field, on stage and in the community isn’t the only way to assess this grade. “I know they will be positive role models due to great reputation and enthusiasm,” said Mrs. Wilhelmsen. “I told them that all classes get to be seniors, but not all classes deserve the title. I’m confident they deserve it and will rise to the challenge.”