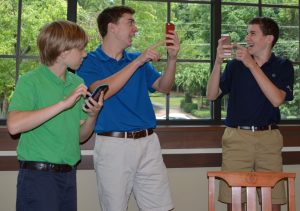 Freshmen Andrew Miller, Harris Greenbaum and Robert Cushman (L-R) show off their rare Pokemon to one another. Photo: Amy Butler

Ever seen strangers walking around while constantly staring at their phones? Or seen a group of people sprinting towards seemingly nothing? You’ve probably witnessed them using the hit new phone app Pokemon Go. Making a comeback from the 1990s and early 2000s, Pokemon, with its new app Pokemon Go, is taking the world by storm. Players around the world will do whatever it takes to “Catch ‘em all.”

Running across busy streets, going into strangers’ backyards and continuously driving around for hours are just some of the day-to-day normalities of the avid Pokemon Go participant. “I ran from the Prado, across Roswell Road and into an apartment complex so I could catch a rare Dratini,” said junior Scott Leven. “It was truly an exhilarating experience.”

Pokemon Go is essentially a game that combines animation and reality. Pokemon characters will pop up on player’s phone screens through the camera as if they are there in real life. In order to catch these Pokemon, the user needs Pokeballs. Pokeballs can be found at Pokestops, which are landmarks at various places. The Prado and Piedmont Park feature many of these Pokestops, and therefore are extremely popular spots to play the game.

It is common to see at least 30 people sitting around as Pokemon show up on their screens and Pokestops are refreshed. Although this appears to be simply loitering, it can actually benefit restaurants and stores nearby. Businesses can attach Lures to their location, which attract surrounding Pokemon. This can create more foot traffic as people show up and potentially visit their establishments.

Despite these benefits, there are some downsides. Two men walked off a cliff not paying attention to their surroundings as they were attempting to catch Pokemon in Encintas, California. Robbers have used the app to lure victims to a secluded area. In addition, an unlucky man’s house in Massachusetts has become a Pokemon Gym. People constantly sit by his house, battling virtual Pokemon.

Students at Pace continue to join in the craze. “The craziest thing I have done to catch a Pokemon was when I was in the Minnesota airport running to catch my flight back to Atlanta,” said junior Daniel Blumen. “I saw a Tauros [rare Pokemon] behind me and quickly ran back through the airport to go catch it. Luckily I caught both the Tauros and my flight.” Daniel’s favorite part of Pokemon Go is that he is able to play a game that he played throughout his childhood. But now he, along with many others, enjoy Pokemon in a new and exciting way with not only friends but people across the globe.