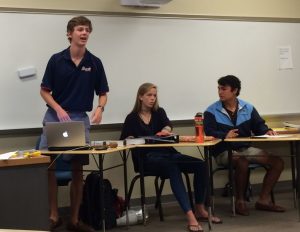 Knightly News: So Chris, what did you do this summer?

Chris Howard: I worked at an Air Force base.

KN: Can you be more specific?

CH: I worked in the turbine engine fatigue facility at Wright Patterson Air Force Base. I was given a project to investigate the effects of surface roughness on tensile properties and fatigue life of titanium 6 aluminum 4 vanadium specimens.

KN: How did you test this?

CH: I developed a procedure in which I looked at how strong these 3D printed parts were. I got the specimens and I put them into the 22 kip mts axial servo hydraulic load frame in which it would push and pull at a certain frequency until it breaks. I interpreted that data into a graph and made a presentation about it.

KN: Wow, that is very impressive.

CH: Thanks, it took a lot of work but I really enjoyed it.

KN: What are you most excited about for senior year?

CH: I am most excited for getting into college and knowing where I go. And Spirit Week. And prom.

KN: Why did you first decide to get involved in student government?

CH: I don’t know, my oldest brother Jake did it, and he really liked it. I thought I would like it too.

KN: Did you ever think you would become student body president?

CH: Yeah, so I knew in sixth grade I was going to be student body president. No, I was just taking it one year at a time. When I ran in eighth grade, I never expected to win it senior year, or even expect to run again the next year. I just did it one year, figured out I liked it a lot, so I just kept running.

KN: Why did you keep running?

KN: What are some of your new responsibilities coming from president of a class to president of the entire student body?

CH: Oh, you do a ton more work, because you have to plan everything. As president of a class, each year you are just told “alright, go to these sales,” “show up here at this time,” you vote on stuff occasionally during the meetings. When you’re the student body president, not just class president, you have to plan everything. You are the one telling people to do stuff. It takes a lot more time, but it is a lot more rewarding.

KN: What are some changes the Student Council plans to enact this year?

KN: How is the college process going?

CH: Such a mystic process in its process, but in the end the process is probably better than the destination.

KN: What is the thing you will miss most about Pace after you go to college?

CH: Such that Pace is an academic campus, it’s different from other places in its academia, its libraries, and its teachers.

CH: Such as in those circumstances. I’ll miss the teachers most.

KN: Anything else you want to say?

CH: Tell Ms. Wilson I said hi, and that I had a good run with newspaper.