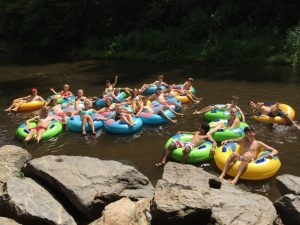 Pace cross country runners enjoy tubing down the river at their camp over the summer. Photo: Gus Whyte

With the leadership and guidance from senior cross country captains Max Irvine, Rob Warren, Mary Brooks Perkey and Julia Ross, the team expects numerous victories this season. “The captains are great,” said sophomore runner Veronica Sandoval. “Julia is a good leader, Mary Brooks is really funny and they are very devoted to the team.

“It’s fun being oldest and messing with people,” said senior Ross Cefalu. Along with the incredibly talented seniors, the team consists of young freshmen who “are better then we ever anticipated,” according to Coach Steve Cunningham. Losing Class of 2016 runner Alec Rogers hurts the team a little, he said. “But we have some freshmen that I think will step up.”

Although many new freshmen joined the team this year, they are not the only new runners on the team. “It’s fun to see all the new team chemistry and join a part of that,” said sophomore Andrew Ladden, new to the team this year. “I like hanging out with everyone; the seniors are cool, and the juniors are cool.”

Practicing for around two hours daily, the runners show their commitment to cross country. In addition, the runners attend a 6:30 a.m. yoga class on Fridays to stretch their muscles after the tough practices throughout the week and just relax. “You just run, stretch and drink chocolate milk,” said Veronica. “It’s fun getting to hang out with your friends.” She is extremely dedicated to cross country, spending 40-50 minutes on the weekends running, preparing for the exhausting week of practices and meets.

Over the summer, most of the runners on the team attended a challenging sleep-away running camp to train and get ready for the upcoming season. A day at the camp consisted of waking up at around 6 a.m., followed by a workout – usually yoga or Pilates – then, breakfast. The runners then had free time until lunch. Their afternoons were spent doing team building activities, followed by a six to eight mile run. After showering and eating dinner, the runners participated in an evening activity. One night, they played in a dodgeball tournament against other schools. The Pace athletes crushed most other teams in the tournament until their defeat in the championship.

On Aug. 19, the Knights traveled to Canton, Georgia for their first meet of the year. By finishing the 2-mile race in 10:21, junior, Jack Douglass, placed first in Class AAA. “Jack is looking to have a very successful season,” said Coach Steve Cunningham.