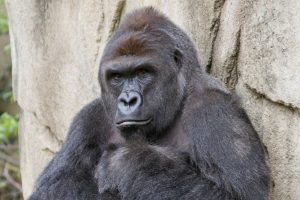 The 17-year-old male gorilla Harambe was shot and killed after he grabbed a three-year-old child who fell into his exhibit. Photo: Mark Dumont

The Cincinnati Zoo was home to a tragic incident on May 28: the killing of 17-year-old male gorilla, Harambe. The reason for Harambe’s death has caused controversy throughout the world. On that Saturday, a mother, father and their son were visiting the zoo when the boy managed to slip into the moat of the gorilla exhibit. Being a wild animal not accustomed to interacting with humans, especially three-year-old children, Harambe began dragging the child through the water. In response, zoo officials shot and killed Harambe, believing this was the only option to save the child.

These actions stirred people throughout America and most of the world. Countless tweets were sent with opinions on the killing of Harambe, and a “Justice for Harambe” Facebook page was created to pay respects to the gorilla. However, this controversy is a moral dilemma with no easy answers. Whether or not you believe that Harambe should have been killed is based on your own views of animals and their value in comparison to human lives.

Although many people are shocked and upset about the killing of Harambe, it was probably the best option for the Cincinnati Zoo. The mother of the child was also a main target for blame throughout social media. Yes, the mother (and the father) could have paid more attention to the child since he was only three years old; however, the zoo officials believe that saving the child was of foremost importance, so their response must be respected. And while they may be getting a lot of criticism on social media, the action is done and there is nothing that can be done besides blaming people and creating Harambe fan clubs.

Another idea that is frequently raised on social media is that the zoo officials should have used tranquilizers on Harambe in order to save the lives of both Harambe and the child. However, that would have put the child at greater risk. The tranquilizers would not have been able to instantly knock out Harambe, and a drugged up 450-pound gorilla would have been just as dangerous, if not even more dangerous, to the child.

Therefore in the Cincinnati Zoo’s unpopular opinion, the decision to kill Harambe and spare the child’s life was a tough, yet necessary, action to take. Even though they are getting a lot of grief now, the Cincinnati Zoo made their determination. Although it took the life of a 17-year-old gorilla, it was the most logical course of action, and was the right decision in this unfortunate situation.