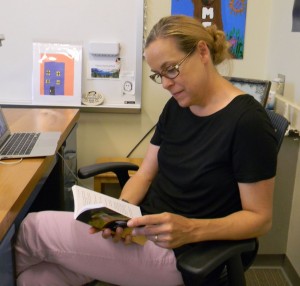 Whether one is relaxing at the beach, traveling abroad or just staying in Atlanta, there are many opportunities this summer to enjoy a good read. Here are a few book recommendations from Pace teachers that are worth picking up this summer!

Math teacher Krista Wilhelmsen recommends “The Secret Life of Bees” by Sue Monk Kidd. Taking place in 1964 in South Carolina, a 14-year-old white girl named Lily Melissa Owens lives with her abusive father and black nanny Rosaleen on a peach farm. Lily holds onto a horrible secret about her mother’s death that haunts her daily. In order to escape her father and discover more about her mother’s past, Lily runs away with only a bag of items remaining from her mother Deborah.

She brings Rosaleen along after breaking her out of jail over a racial injustice, and the two make their way to Tiburon, South Carolina, on a trail that leads them to the Boatwright sisters’ house and honey farm. The black Boatwright sisters take in Lily and Rosaleen, but Lily hides her true identity from them. As Lily and Rosaleen grow more comfortable within the community of sisters, they learn more about the true beauty of love, sisterhood and the commitment to justice for all. Mrs. Wilhelmsen, a mother of two, also recommends “Little Blue Truck” by Alice Schertle and Jill McElmurry, “Goodnight Gorilla” by Peggy Rathmann and “Little Miss Spider” by David Kirk.

Counselor Sara Eden and English teacher Erica Barbakow both think “The Secret History” by Donna Tartt is an excellent read for the summer. This book focuses on a group of six friends who are a part of an ancient Greek studies program at Hampden College in Vermont. Each of these unique students brings something different to the group, which is led by professor Julian Morrow. The core of the story revolves around four of the six students (Henry, Francis, Camilla and Charles) who attempt to perform a Bacchanal, which is an ancient Greek ceremony designed for participants to commune with Dionysus. This legendary ritual has never been able to be recreated in the same way as the Greeks thousands of years ago. After a lot of trial and error, the four manage to recreate the ceremony exactly, but a man is brutally murdered in the process. Following the death, the students deal with a lot of blackmail and distrust amongst themselves. This riveting read is a page turner.

“Beating Goliath” by Don Yaeger is one of chemistry teacher Joe Sandoe’s favorite books. In it, the head coach of the Baylor Bears college football team Art Briles recounts his life. Having lost his parents and aunt in a car accident when they were driving to watch one of his college football games, Briles’ faith was tested early in life. This event shaped Briles’ pursuit to follow the values of faith and hard work that his parents instilled in him. He has put these values to work on and off the football field, especially when he helped turn multiple struggling football teams into winners. Within three years after being hired to coach the Baylor Bears in 2007, Briles led the Bears first bowl game win in 15 years. This inspiring and compelling autobiography is definitely worth the read.