PASEC Finishes Off its Year of Food 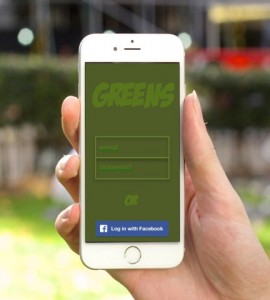 An idea of what the prototype of the app Greens will look like. Photo: Ethan Much

Last September, over 18 teams joined the Pace Academy Social Entrepreneurship Challenge (PASEC), unaware of the work and dedication needed to develop a business. Slowly the teams dropped out as the hard work became too much to handle, leaving six teams in the competition. “Our team was unfortunately unable to continue due to our team’s busy academic and athletic schedules, which interfered with the time commitment required to succeed in the competition,” said sophomore Sam Delman.

As presentation day finally arrived on April 13, groups anxiously waited for their name to be called to present their product, app or business. Teams were required to prepare a business pitch that includes finance plans, other product competition, sources of revenue and target customers. The judges included Pace Trustee Elizabeth Richards, an Emory professor and the new design thinking teacher in the Middle School. They critiqued the six groups and selected a top three to present their concepts in front of the whole school on April 25. The judges were very impressed with the students’ presentation skills.

“Every year the presentations have gotten better and the ideas have gotten a lot more professional,” said program sponsor Mr. Hattori. Many students have been doing this for multiple years, and therefore have more experience with the competition. The winner will be announced today and will receive $10,000 to help launch their company.

Your Grocery is one of the top three businesses remaining in the competition. The team includes sophomores Daniel Blumen, Ryan Mazur, Jordan Shoulberg and Ben Thompson. “The app is essentially a joint family grocery list,” said Jordan. “If a family member inserts an item that they need at the grocery store, then that note will go to the rest of the family. Once it is bought, the food will be crossed off the list,” The app also includes a premium version that gives the buyer promotions from sustainable food companies. Additionally, the group has partnered with Coca Cola to promote their app.

Greens also remains in the competition, along with SafEats. Greens is a team composed of sophomores Ethan Much, Richard Ellis, Sarah Ann Ninan and Chris McCaffery. It is the first non-profit app of its kind. “Its goal is to alleviate the devastation from the mass amounts of food waste,” said Ethan. The app will allow users to be rewarded with healthy food from participating stores after they deliver food from these stores to food banks and pantries. The Greens app will have a test run this summer at the Publix on West Paces.

Juniors Taylor Upchurch, Mitchell Zwecker and Emma Downey created SafEats. This trio has the most experience of the finalists, with this year being Emma and Taylor’s second year and Mitchell’s third in the competition. SafEats is a mobile app that acts as a database and crowd-sourcing hub to provide different restaurants’ information on food allergies. “We have begun partnering with local restaurants and pre-existing online databases to compile an easily accessible database,” said Taylor. “Users will create a profile and then search restaurants and see how accommodating their menus will be to their dietary needs.”

Some possible types of users will include vegetarians, those with religious restrictions and those with food allergies. “The problem we’re addressing is mainly that people don’t consider how serious allergies are or how many people they impact,” said Emma. The app is unique in that there is no other app that assists people with allergies like SafEats.