Pace Class of 2016 Legacy Will Live On 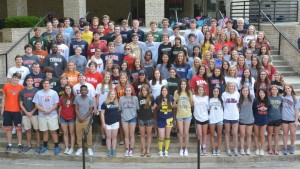 As the Pace Academy school year comes to a close, the celebration can be bittersweet, for the reign of the well-loved Class of 2016 comes to an end as well. However, though our seniors will have left us, their legacy will live on here at the Academy. “There are a lot of big, bright personalities in this class,” said Class of 2016 Dean Mr. Fleming. “This class is not bashful and really proud of who they are.”

This class has not only weathered many changes here at Pace Academy, having been students in three different upper school buildings in the past four years, but they have excelled. Whether it was on the field or stage, or in the darkroom or classroom, this class has displayed a special passion and pride for what they love. In an incredible performance of the “Legally Blonde” musical in particular, seniors such as Payton Gannon dominated the stage and many significant roles. Payton performed as “Paulette” in her last Pace Academy musical, a tradition that began in elementary school when she was cast as one of the Von Trapp children in the Pace production of “The Sound of Music.” “I grew up in the theater department at Pace, and it has been my home since I came in fifth grade,” said Payton. “Some of my favorite memories are from tech week because when everyone is exhausted, sick, and stuck together for eight hours, everyone bonds. It is an unexplainable experience.”

In other arts around campus, many seniors have found excellence and success. Lindsey Sample, joining the Pace Class of 2016 her freshman year, excelled in her photography career during her four years at Pace. Earning such awards as Honorable Mention from the Scholastic Arts competition, a third place at the Atlanta Celebrates Photography (ACP) annual show, and an Honorable Mention in the ACP My Atlanta Show, Lindsey is looking forward to pursuing photography among other interests at Vassar College in New York. However, Lindsey found that her favorite memories at Pace were not necessarily based on artistic success but center more around the student body. “Friendships here are my favorite part about Pace,” said Lindsey. “The little things that people do, from bringing roller blades to school to Sweater Wednesdays. We’re surrounded by a group of such incredible people and I just love that about Pace.”

On the field and the court, it is no secret that this class made history as back-to-back state champions for the first time ever in both football and basketball. “I will probably miss my coaches and teammates the most out of anything,” said senior Jack Walsh, accomplished wrestler and football player. “My coaches have been a huge help for me and my entire career.” Jack is committed to wrestle at the University of Virginia and is just one of many standout student athletes.

This class succeeds in the classroom as well. There are many academic scholars in this senior class, but certain students, such as Jack Eichenlaub and Andrew Wu, received recognition as STAR Students from the Student Teacher Achievement Recognition (STAR) program. These honorees are recognized for achieving the highest SAT score at their respective schools and must be ranked in the top ten of their graduating class. “My favorite memory in the classroom has been this year’s AP Physics with Dr. Pearson,” said Jack. “3D printing rockets and boats has been a ton of fun, and our grade has broken every record he has so far.”

Though they leave us on May 14, the seniors’ legacy both in the classroom and beyond is impressive. “Just to see them really come together was something special,” said Mr. Fleming. “It’s the smaller moments that right now may seem very minor and insignificant, such as home room, I will miss the most.”