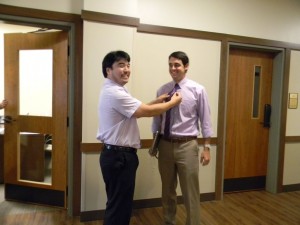 Mr. Hattori will miss the special friendships he has formed with his co-workers, especially Mr. Whyte. Photo: Sarah Kitchen

As the ordinary Pace student ambles down the hallways of the Arthur M. Blank Family Upper School, a familiar voice jolts them from their daze. All worries, million dollar ideas or intended actions on Neko Atsume are pushed aside to acknowledge Mr. Thomas Hattori’s iconic greeting, “How we doin’?” While this gesture may appear to be simply a polite formality, it is truly indicative of the outstanding character that Mr. Hattori displays. The enthusiasm, wisdom, compassion and leadership found in this man are some of the reasons why he is adored by students, parents and faculty members alike.
As the dean of the current junior class, Mr. Hattori has an influential role in the Pace community. Somehow, he is able to simultaneously have a relaxed and light-hearted attitude while keeping a serious demeanor. This allows him to be approachable and earnest in his guidance of his students. “He has our best interests in mind, but it can get annoying when he yells at us for goofing around or playing basketball during our frees,” said junior Julia Robison. Mr. Hattori can be found prowling around the lower library, using his intimidation to force students to stay productive (using his legendary “Exams start now” argument) or cracking jokes with a casual passerby in the courtyard.
Mr. Hattori’s friendly nature can be best seen in his AP Biology classes where he tries to cater to the students’ needs by creating a “chill” environment. The course is still extremely challenging, but he tries to optimize success on the AP and in the classroom by easing up on homework and using his perhaps over-abundant sass to brighten the days of his students. The juniors and seniors who take his class love the interactivity it provides, allowing them to engage with the material in a different way than just reading a textbook. He is also exceptional at helping students answer a question or understand a concept on their own rather than telling them the simple solution they might want to hear. Many rising juniors and seniors are upset that they will miss the opportunity to be in his class next year.
Mr. Hattori has also had an instrumental role in creating the Social Entrepreneurship Challenge, which began in the fall of 2013. This program has yielded some excellent innovations, such as the Scootle app (created by Class of 2015 alumni Matt Tannenblatt, Larine Hamied and Tanner Lewis) as well as a number of creative solutions to the water crisis from last year’s challenge. The Social Entrepreneurship program is closely connected with a number of developments at Pace, such as Women Mentoring Women and the Isdell Center for Global Learning, involving both global ed trips and the ICGL scholars program. Without Mr. Hattori’s help, these programs may never have been achievable.
Mr. Hattori is conflicted over his departure from Pace after seven years and all that it has to offer. “There is no ‘one thing’ I will miss about Pace. I will miss ‘everything’ about Pace,” said Mr. Hattori. He will especially miss the exceptional families, students and faculty at Pace, as he believes that Pace’s community is one of a kind. However, this bittersweet chapter in his life will allow him to move back to California, where he has wanted to be for a long time now. At his new location of Ojai, he will be able to spend much more time with his family, which is an essential for him. He is looking forward to sharing the importance of his family values with his two children who will get to see their grandparents more frequently than they could previously. He has a position at the Thacher School, which is a boarding school where he will serve as a dorm parent and as a math teacher. This new school cannot recreate what is so special to him about the Pace community, but he hopes that it will be somewhat similar to a few of Pace’s great qualities.