He Got Open: Thomas Invited to Prestigious Football Camp 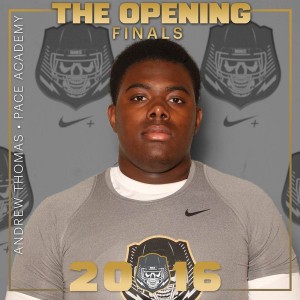 Andrew Thomas becomes the first Pace Academy Knight to be invited to the Opening. The 6-foot-5, 318-pound tackle was named to the all-state team by the Atlanta Journal-Constitution, as well as AJC Offensive Player of the Year for the City/South Fulton Division. Photo: Todd Huber.

The Opening, hosted by Nike, is coming soon this summer. Each year, the billion-dollar shoe company hosts regional  football camps across the United States in search of performances from some of the nation’s top amateur talent. A select group of high school players are chosen to attend and compete in The Opening, high school football’s most elite camp.

This summer, a certain face that is familiar to the Pace community will be on the television screen. On April 7, junior Andrew Thomas was invited to compete at the famous event hosted in Beaverton, Oregon. His name has been added to a long list of successful players who have participated in the camp, including Robert Nkemdiche, Laremy Tunsil and Jalen Ramsey (all of whom were projected as first-round picks in this year’s NFL draft). Thomas will attend the camp in early July.

“I’m elated to be invited to The Opening,” said the 6-foot-5 offensive tackle who is ranked as a 4-star prospect by ESPN. “It is truly a prestigious honor to compete against the top 160 players in the nation and the top 20 players at my position. I’m very blessed.” Thomas came to Pace as a 6’2 freshman with promising potential yet extremely raw talent. Under the tutelage of Knights head coach Chris Slade and offensive line coach Kevin Johnson Sr., Thomas developed into a dominant force on both sides of the ball for the Pace Knights. Eventually he became an integral part of the Knights’ 2015 state championship team. Thomas didn’t allow a sack this year at left tackle while recording 56 tackles, 10 tackles-for-loss and a sack at the defensive tackle position.

“Making it to The Opening is big for Andrew,” said Coach Johnson. “Not only is it big for him, it’s also big for the Pace community. From a football standpoint, college coaches used to drive by Pace just a few years ago. Now they’re kicking the door down. Thanks to Coach Slade and his leadership, Andrew gets to showcase his talent in front of millions of viewers. This is a step in the right direction for Pace Academy football.”

After he attends The Opening in July, the rising senior has two daunting tasks ahead of him: leading the Knights’ to another state championship season and choosing a college. For now, the state championship is far away and there are many steps to climb before reaching that point. But when it comes to recruiting, Thomas has narrowed a list of nearly 30 offers, and is seriously considering Clemson, Notre Dame, Alabama and Georgia (note that Thomas is still far from making a decision and that anything can take place from now until February 2017).

There are many things to look forward to from this talented 17-year-old. For now, many sports fans in the Pace community can tune into the ESPNU channel in early July and watch Andrew compete (and hopefully dominate) against some of the nation’s elite talent.