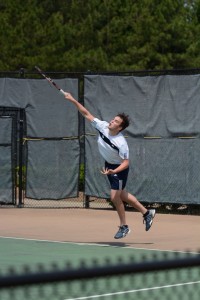 As spring heats up, so does the tennis competition in the state of Georgia. Aside from alumnus Matthew Seaman graduating in 2015, the boys varsity tennis team brought back most of the state finalists from last year. After suffering a heartbreaking loss in the state championship in 2015, the Knights used the loss as motivation to keep working every day on the court.

This season, head coach Neil DeRosa brought in freshmen talent Charlie and Joe Hirsch and Will Funston. “This year, we were fortunate to have the young talent contribute and also the leadership of the older players,” said Coach DeRosa. “We had the older guys, like [jumior] Prashanth [Kumar] and [sophomore] David [Leven], teaching the young talent how to be a good members of the team.”

The star of the team this year was #1 singles Will Funston. “It has been a lot of fun this year watching Funston grow as a player,” said junior Ben Bernstein. Along with Will, Prashanth and David brought even more talent. “The team this year is extremely talented and fun to be on, and we have come together as a group,” said David.

Nicholas Kratz was the team’s only senior, which means the team will come back again next year with lots of talent. “Although I’m sad to be leaving the team, I know they will keep improving and be an even better team next year,” said Nicholas.

The Knights had a 9-4 record going into the region tournament and were #1 seed. But the team was upset twice in the tournament, with losses to Lovett and Greater Atlanta Christian.

The team had a tremendous playoff run, however, ending as GHSA Class AA Runner-Up after a tough loss to Lovett in the championship game of the state tournament on May 7. On the way to the state finals, the team defeated Darlington School, Dublin High School, Bleckley County High School and Holy Innocents.’