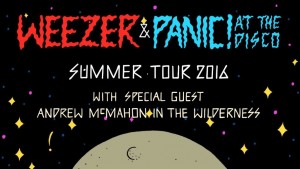 Take a break from the swimming pools, and sleepaway camps with this summer’s sizzling lineup. Photo: Panic! at the Disco

Break out the coolers and dust off your flip flops, because this year’s summer lineups are jam packed with something for everyone, whether you prefer country crooners or rambunctious rap stars. Atlanta has become a thriving center for music, with the scorching months of summer marking the opening of popular outdoor concert venues such as Lakewood, Chastain and Verizon Amphitheater.

Kicking off at Lakewood, country heartthrob Luke Bryan is scheduled to perform on May 20 and 21. Bryan is touring the country promoting his latest album Kill the Lights. Nevertheless, he is more than likely to bust out fan favorites such as “Country Girl” and “Rain is a Good Thing.” Just a short distance up the road, Athens’ Georgia Theater is laying out a summer lineup perfect for this college town. On May 28, Edward Sharpe & The Magnetic Zeroes, famous for their rendition of “Home,” are kicking off the start of summer.

Over in Alpharetta, Ellie Goulding is taking the stage with Matt & Kim on June 6 at Verizon Amphitheater. Goulding’s soulful notes paired with Matt & Kim’s eclectic style is bound to have audiences of all ages going home smiling. For those who prefer a retro rewind, Journey and the Doobie Brothers are partnering this summer to excite 80’s lovers nationwide.

June 11 is the night to go out between R. Kelly’s smooth R&B at Phillips and Keith Urban’s rustic down under flair at Verizon. For audiences that prefer alternative, Weezer and Panic! at the Disco’s highly anticipated tour featuring Andrew McMahon in the Wilderness is coming to Lakewood on June 13. After an incredible set at Music Midtown, Panic! is coming back for seconds, and Weezer is the perfect band to complement their angsty sound.

On June 21, the Wombats are coming back to Centerstage. Although they are still a rather “underground” band, this British group’s unique mix of rock and alternative is highly underrated. Finishing off June, Guns ‘N Roses will make a monumental reappearance at the Dome on June 27. The annual Vans Warped Tour featuring 30H!3 will be at Lakewood on June 30.

In July, Modest Mouse is crawling its way into Chastain on the 10th, with mighty sounds of “Lampshades on Fire” and “Float On.” However, this pales in comparison to July 22 when Wiz Khalifa, Snoop Dogg, Kevin Gates and Jhene Aiko take the stage. After last year’s Boys of Zummer tour, Wiz is proven to be a crowd pleaser in Atlanta, and Kevin Gate’s latest hits are sure to have audiences raving.

For those that prefer pop, 5 Seconds of Summer is coming back with their Sounds Good Feels Good tour. Ending the summer, radio’s on the rise Twenty One Pilots is sold out at the Infinite Center in Duluth. After their record breaking “Stressed Out,” the band has received much needed exposure and circulated a lot of hype about their tour.

Categories
EntertainmentLifestyleSlideshow
Back to Top