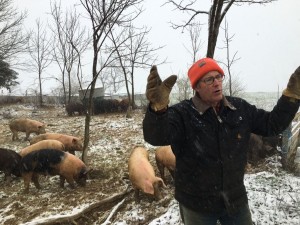 The four Isdell Center for Global Leadership (ICGL) scholars traveled to Maine and Virginia with chaperones Trish Anderson and Kevin Ballard during the week of March 17. For their second study trip of the academic year, senior Emma St. Amand and juniors Thomas Hoover, Annie Nottingham and Lex Trevelino immersed themselves in all aspects of farming and cultivation to expand their knowledge of the theme of food. Having traveled to California this past October to start off their food studies, the ICGL leaders learned about the weather and farming conditions in the West. To gain a different perspective on food environments, the leaders headed north to learn about small-scale agriculture.

During their time in Virginia and Maine, the group talked with a variety of farmers ranging from crop and dairy farmers to sheep and cattle farmers. These first generation farm owners taught the group about what drives their hard work. They are motivated by “the desire to be independent business owners and the desire to produce good, wholesome, fresh and healthy food for their communities,” said Ms. Anderson.

The six-person team visited a number of farms. One of the highlights included a tour of Joel Salatin’s farm called Polyface Farm. Mr. Salatin, a farmer and lecturer who previously spoke at Pace in the fall, showed the group firsthand how his closed-loop farm functions. “Joel Salatin is the most sustainable and efficient man in America,” said Annie. “From designing a closed system of raising animals where all the animals are interconnected and dependent on each other, to constructing an irrigation system made from small ponds ascending in altitude so that gravity propels the water down to the animals, this man has thought of it all.”

Other places on the agenda included the Maritime Museum of the Chesapeake Bay, Cherrystone Aquafarms, South Paw Farms, Dandelion Spring Farms and two seed companies called Johnny’s Select Seed and Fedco Seeds. At South Paw Farms, the group met with Pace alumna Meg Liebman Mitchell who started her farm in Maine. The students and faculty learned a great deal about her vision and connection to farming while planting in one of her greenhouses. “It was really fun because volunteering on a local organic farm is how I got interested in the theme of food,” said Lex.

Dandelion Spring Farms generated a lot of interest as well, especially as the group worked with animals such as cows, sheep, pigs, chickens, etc. The leaders’ and chaperones’ favorite moments were milking cows, holding baby chicks and witnessing a sheep give birth.

This trip to Virginia and Maine brought a lot to the table. The Pace representatives for the Year of Food learned a great deal about the diversity of farming in the North and what makes North American farmers so unique and passionate about their jobs. “These farm owners are some of the smartest, most inspiring and hardest working people I’ve met,” said Ms. Anderson. “Their dedication to their craft is palpable. They absolutely love what they do, whether it’s tending to the cultivation of the soil, caring for their animals, choosing which seeds to buy and plant or planning their harvesting schedule… Their attention to detail and their ability to think strategically and creatively is astounding. Farming is not for the faint of heart. That’s for sure!”