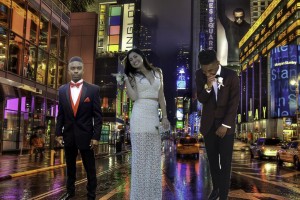 For the 2016 Pace Academy junior senior prom, high school boys and girls from all grades arrived at the Puritan Mill venue for an unforgettable “Arabian Knight.” Students dressed to impress in their gowns and tuxes, and were admired by teachers and chaperones during their grand entrance to the formal. Three upperclassmen in particular, junior Trey Blount and seniors Julia Stern and Xori Johnson, made trend-setting fashion statements on the dance floor.

Trey made his appearance stag in a bright red vest and bowtie along with his black tux. “I wore my rings and watches to sparkle in the sun and make the pictures look cool,” said Trey. “Then for the Arabian theme, I thought wearing red was a smooth color choice.” Like many other students, Trey rented his tux for prom. This can be a smart alternative to buying a tux since formal events don’t typically happen that often. However, this year has been an exception for Trey. “It’s probably been my fourth time getting dressed up like this in this school year,” he said. Trey believes that as a guy, the prom “go-to” is a bowtie with a cummerbund and pants that are “slightly short” in order to show off his magnificent socks. However, Trey was not the only Pace student sporting some serious fashion skills.

“I’ve gotten dressed up this fancy only a couple of times, for big family functions and prom last year,” said Julia. Head to toe in a cream design, she looked stunning in her two-piece prom gown. “I feel that classier dresses are usually more simple,” said Julia. “My mom and I just went out shopping in Buckhead one day and I found it immediately in the first shop we walked into.” For festive effect, Julia even asked her makeup artist to use Arabian hues for her makeup inspiration. She was escorted by fellow senior Andrew Wu. “He didn’t say much about my dress,” said Julia. “We didn’t plan much to match or anything.”

Last, but certainly not least, Xori made a killer appearance at prom. Only claiming to have been in a tux two or three times, Xori definitely takes advantage of opportunity when he sees it, or at least when it’s time to look chic. Xori wore a maroon dinner jacket, paired with black tux pants and bow tie. “I tried to get the maroon incorporated into my outfit and my date wore a headpiece so we kind of had that Arabian feel,” said Xori. “She was my best friend, Christine, who also happens to be my neighbor, and she loved the tux.” Xori and Christine looked dazzling as Christine coordinated with the maroon dinner jacket with her lipstick, and nails. Like Trey, Xori also rented his tux. “The classiest outfit someone could rock for prom is definitely a tuxedo or a really nice dress for the ladies,” said Xori. “Very classy.”

Honorable mentions for some of the most glamorous students at prom include junior Amanda Hinson and seniors Hope Lenox and Darby Cochran. Kudos to all students who attended prom for keeping Pace Academy classy as ever. “Prom to me is all about dressing up and looking smooth,” said Trey, “and then translating how good you look on the dance floor by showing off your groovy dance skills.”