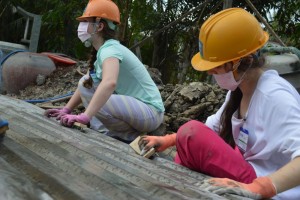 Junior Emma Downey and Senior Tory Dancu work hard on the build site in My Tho. Photo: Caitlin Jones

At 9 a.m. on March 3, 18 students and three faculty advisors gathered at Hartsfield Jackson International Airport to board the first leg of their trip: a 15-hour flight to Seoul, South Korea, followed by a five-hour flight to Ho Chi Minh City, Vietnam. As the weary group filed into their hotel at 1 a.m., students and faculty alike were clueless as to the impact of the trip ahead of them.

As the students explored the southern capital, previously known as Saigon, they visited the immaculate city center, including the departure point of the final U.S. helicopter from Saigon at the end of the Vietnam War. The students scrambled through the tunnels of the Viet Cong and learned about their tactics and the grueling traps they used. One aspect of the trip that surprised the travelers was the different perspectives they encountered concerning the Vietnam War (or as they call it “the American War”).

Soon the travelers left Ho Chi Minh City and ventured two hours south by bus into the Mekong Delta into the small city of My Tho. Here, the Habitat for Humanity build began and the students met the two families for whom they would be building houses. First, a family of four did not have a real house over their head but needed one so they could send their two kids, a 13-year-old boy and a 16-year-old girl, to school. The second family was led by an older grandmother who was described by several members of the trip as “the sweetest woman of all time.”

As they worked hard on laying brick, making mortar and enjoying the various fruits and snacks laid out by the families for the breaks, the students got to interact with the families, particularly their kids who were practicing English to varying degrees of success. As the Habitat supervisors coronated the build site, the students said their goodbyes at a banquet held at the hotel where the students were staying.

After their time on the build site, the students boarded a plane to Hanoi, the official capital of Vietnam, where they toured the Hanoi Hilton, the famous Vietnamese prison that once housed Senator John McCain as a POW. During their last few days in Vietnam, the students went on several excursions that included learning how to plant rice, a bike ride through Dry Halong Bay and the world-famous Halong Bay where students learned about the Vietnamese pearl industry and explored the caves of the “islands” of the bay. The trip goers were all profoundly impacted by the journey and the people of Vietnam. As Mr. Sandoe so aptly stated, “the scenery and local people were great, students were the worst.”