March Madness Ends with a Bang 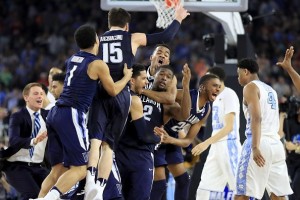 This year, the 68-team tournament culminated in an epic showdown between the ACC conference champion UNC Tarheels and the number two-seeded Villanova Wildcats. Going into halftime, UNC had a solid five point lead (39-34) and the momentum was in their favor. Despite this, the Wildcats fought back from this deficit and turned the momentum in their favor. Four minutes into the second half, Villanova took the lead and held it for the majority of the half. UNC, though, fought to stay in the game by only trailing by a few points. With under five seconds left, UNC senior Marcus Paige hit a clutch three to tie the game. With no timeouts left, Villanova’s Ryan Arcidiacono received the ball from the inbound, drove down the court, and pitched the ball to teammate Kris Jenkins who buried the 25-foot buzzer beater for the win.

In preparation for the exciting “March madness,” many fans created brackets to predict which teams they believed would advance in the tournament. Every year, shocking wins by extreme underdogs destroy these tournament predictions. This year was no exception. In the Round of 64 alone, 13 upsets matched the tournament record set in 2001. One of the most shocking defeats was two-seeded Michigan State to the 15-seeded Middle Tennessee State. Over 98% selected Michigan State to win the game and a whopping 22% selected Michigan State to win the whole tournament.  “March Madness is my favorite time of the year,” said senior Samuel Sloman. “At some point, you have to give up on your bracket and embrace the madness.”