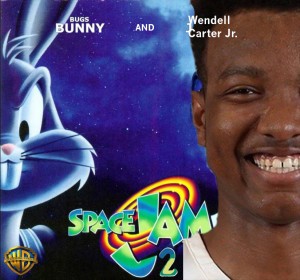 Pace Academy basketball legend and 5-star recruit Wendell Carter Jr. has been tabbed by Warner Bros. to star in a remake of the 1996 classic Loony Toons and Michael Jordan mashup “Space Jam.” Wendell was ecstatic about the opportunity. “When they (Warner Bros.) asked me to be the new face of the ‘Space Jam’ franchise, I immediately agreed,” he said. “‘Space Jam’ was my favorite movie growing up and I can’t wait to star in the new movie.”

Long rumored to be making a sequel, the media company decided to spurn players from the NBA and college basketball for a high school athlete. When asked about the decision, Warner Bros. CEO and chairman Kevin Tsujihara said, “We wanted to choose a face for ‘Space Jam’ that was a rising star, someone we could make more movies with as he gains recognition in college and later, hopefully, in the National Basketball Association. We think Wendell has a chance to be an NBA All-Star down the road, and we want to capitalize on that star potential now.”

An early synopsis of the movie reveals the plot to be similar to the Jordan-led original, with Carter teaming up with the Looney Toons and Bill Murray (who will be reprising his role from the original) to take on a monsterized team of Region-6AA opponents made up of Lovett’s Charles Nastopoulos and Ryan Greer and Holy Innocents’ Cole Smith and Richard Surdykowski, with an appearance from the former HI player Sam Asbury, who was lured out of retirement to play in the game.

Production for the movie will start in the summer. Wendell will be traveling to Los Angeles to take part in filming. Wendell said that he planned to stay with a friend he met last May. “Robert [Downey Jr.] lives out in Los Angeles, but I got to talking to him when he spoke at Pace for graduation and we exchanged phone numbers,” said Wendell. When I found out I got the role, I called him up and asked if I could crash at his place for the summer and he immediately agreed.”

Warner Bros. has bigger plans for Carter than just one movie. “We’re planning a blockbuster trilogy featuring Wendell, taking on different levels of players on his quest to become the greatest basketball player of all time,” said Tsujihara. He hoped that “this will be the start of a beautiful partnership with Wendell for a very long time.”