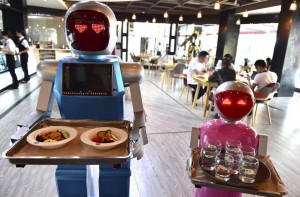 Robots have already started taking the jobs of humans in cafeterias throughout the world. Photo: Jeremy Mifflin

In a shocking turn of events, Pace Academy recently fired the Sage Dining crew due to financial concerns. “The firing of the kitchen staff was strictly for cost-cutting reasons,” said Pace Headmaster Fred Assaf. “Although they have done an excellent job at Pace, there simply was not enough money for them in the new budget, and something had to be done about it.” The lunch staff will be replaced by lunch-serving robots, which reflects a recent trend of robots taking the jobs of humans throughout the world.

The angry Sage staff members who were let go attempted to block the robots’ entrance to the kitchen in protest. “I find this situation incredibly frustrating,” said Chef Jeremy Mifflin. “The students cannot form the same relationships with these robots that they can with actual human beings.”

Some people have ethical concerns with crossing a picket line, but since robots do not have feelings, the robots had no problem entering the kitchen. The robots make food twice as fast as the Sage Dining lunch crew and are cleaning machines, literally. The robots also told Head of School  Mr. Assaf that they plan on bringing new meals to the cafeteria, including chopped liver and onions, fried horse meat and beef stew.

The money saved by firing the human lunch crew will be used to fund Pace’s new varsity cricket team. “The middle schoolers have shown great skills while playing cricket during their P.E. periods,” said cricket enthusiast Demetrius Smith. “I talked to Mr. Gannon and some of the Pace Academy board members and they agreed to start a cricket club for grades 6-12.”

Although they are a cost savings, the robots seem to have some students quite flustered and afraid. “The lunch-serving robots really scare me,” said sophomore Joseph Adams. “Sometimes I don’t even feel comfortable enough to go to the cafeteria. I skip lunch often, finding myself very, very hungry at the end of the school day.”

A recent poll indicated that one third of the students feel as if the robots are going to attack them at any given moment. So now a new question arises: Is the new cricket club worth the students missing their meals?