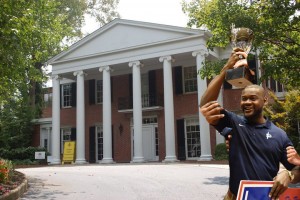 Kabongo cracks a rare smile as he hoists the Knights’ basketball state championship trophy in front of the Lower School. Photo: Zack Kaminsky

There is a new sheriff in town, and his name is Kabeya Kabongo. Starting in the 2016-2017 school year, “Mr. Coach Lieutenant Tsar General Sir” Kabongo will assume the role as head of the Pace Academy Lower School. The event marks a major move from his current position as assistant varsity basketball coach and assistant junior varsity soccer coach. Mr. Kabongo, however, is ready for the challenge. “I’ve already blessed the streets, so now I gotta bless these hallways,” he said.

When Mr. Kabongo’s reign begins next year, his main focus will be reforming the Lower School’s honor system. Walking around the Lower School during his interview, he was reportedly disgusted by how lenient the teachers were on enforcing certain rules. He proposes to institute new policy such as adding double socks to the dress code and using running instead of demerits. “They’re gonna have to learn or else they’ll be on the line doing fifties with [sophomore] Isaiah [Kelly] after school,” said Mr. Kabongo.

So far the reaction to Mr. Kabongo’s hiring has been mixed. Most of the positive responses come from the Pace basketball team, who believe that his attitude and charisma were integral in their march to Macon for the Class 2A state championship. “Kabeya and I are the boys,” said sophomore Sebastian Bradley. “Our team needed him to verbally and physically beat us up to prepare for whatever the team was that we played in the last game of the season.” But many lower school parents feel like Mr. Kabongo’s aggressiveness could be a bad fit for their children. Mr. Kabongo, however, is undeterred. The general believes his rule will be fruitful and questions the haters: “You scared?! You scared?!”