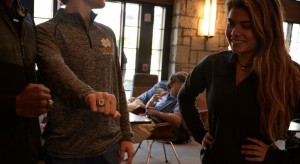 Junior Libby Sams is left awestruck by the football players’ rings as they flaunt them in the Commons. Photo: Sloan Wyatt

Taking three long strides, freshman Madeline Arenth clears the finish line, pausing by the goal to fix her face mask. Sweat trickles down the side of her brow as she doubles over, resting her hands firmly behind her neck, catching her breath. The rest of the girls attempt to pace their rapid, shortened breaths, preparing for the next blow of Coach Morrison’s whistle. Captain and junior Kate Trimble stares blankly across the grass, honing her focus on its faded mid-field line. “One more suicide girls,” shouts Coach Courtney “Coco” Morrison. “Let’s finish strong!”

A series of uneven chants are repeated among the girls, attempting to hype them up for the final stretch, most famously their motto “Road to State.” The whistle blasts, its sharp call echoing through the campus, and the girls spring to life, sprinting with effortless speed. A trail of grass and bits of dirt lay scattered behind them, remnants from the team’s furious stampede.

Coach Morrison glares at her timer intently, mentally willing her girls to dig deeper. Slowly bringing her whistle to her mouth, Coach Morrison waves one hand in the air, signaling the end of the drill. The girls jog off in an organized fashion, thanking their coach for the rigorous session. Another exceptional girls lacrosse practice has come to a close, and another red “X” is drawn on the team calendar, bringing them one day closer to the team’s highly anticipated appearance at this year’s GHSA state championship.

Coach Morrison proudly flips through her season schedule to the date circled in gold sharpie with the word “STATE” written in bold, May 14. The day is carved into the identities of each and every one of these lacrosse players, as freshman Caelan Corbally says, “The upperclassmen have taken the phrase ‘road to state’ incredibly seriously. From day one of preseason there was a certain degree of performance that was expected of us, and the victories of both [the basketball and football] teams have only fueled the team’s desire for the title.”

Exuding with passion and zeal, players such as senior Kellyann Malone highlight the true definition of a championship team. Leading the underclassmen through the trials of losing several senior standouts last year, Kellyann works closely with the younger girls, hoping to bestow upon them her lacrosse knowledge in small doses. “You have to have the mindset of a winner, in order to win,” she says with characteristic confidence. “Visualization is key. Every night I go to bed imagining how that ring will compliment my outfits, and it pushes me to become a better player.” Whether it’s the love of the game, or the rigorous drilling, the varsity girls lacrosse team has the edge needed to transcend them from ordinary athletes to statewide heroes.