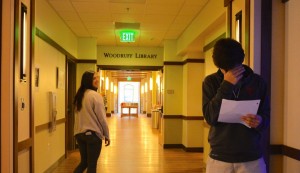 Freshman Andrew Ladden cries after not being matched up with the girl of his dreams, freshman Eden Kerker. Photo: Amy Butler

It’s Feb. 14 and everyone rushes into assembly, violently tearing open the envelope placed on their assembly seat. This envelope contains everyone’s destiny: who their most compatible matches are. Chaos breaks out, as some people get paired up with unexpected people. The data matches are proven to be 94% accurate, so when a couple does not get matched up with each other, tension rises.

One couple, sophomores Hannah Schrager and David Roos, were not even placed in each other’s top ten list. Hannah was most compatible with her ex-boyfriend, sophomore Jack Wray, leading to a confrontation between Jack and David, fighting over Hannah. Jack was victorious, leading him to break up with his current girlfriend, sophomore Samantha Delman, after realizing he still had feelings for Hannah. “When we broke up after dating for two weeks in ninth grade, I was devastated,” said Jack. “I never stopped loving Hannah.”

Another couple, juniors Keeley Harris and Will Trimble, thought they were the perfect match and had everything in common. Assuming they would get each other as most compatible, they opened their data matches together. But at the top of their lists were two other names. At first they tried to play it off, pretending as if the obvious red flag was not a problem. But the arguments slowly bubbled up, revealing the truth behind the data. “The proof is in the pudding,” said Will. After days of relentless bickering, the two decided to “take a break,” having yet to rekindle their love since.

Some students have started to believe there is a conspiracy behind these data matches. Suspicious of the student body representatives in charge of the data matches, seniors Mary Stuart Gray, Mark Handler and Elizabeth Hawn along with junior Prashanth Kumar, students are beginning to believe the questions are a hoax.

“I don’t even think the surveys are sent back to the company,” said freshman Andrew Ladden. “I bet Mary Stuart and Mark spend many hours creating the lists in hopes of causing controversy.” Andrew, expecting to be paired up with his crush, freshman Eden Kerker, was unsuccessful. He even copied down her answers exactly, but she was nowhere to be found on his set of matches. “I guess there’s always next year,” said Andrew as he dreamily gazed down the hallway at Eden.

For couples hoping to stay together, it is probably in your best interest not to participate in the annual data matches, because the likely outcome appears to be an increase in broken hearts.