Arthur M. Blank Family Upper School To Be Torn Down 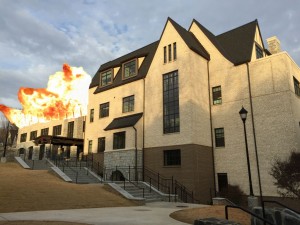 The fall of 2015 represented a banner year for Pace Academy, with an expansion of the student body and the opening of a state-of-the art, $32 million dollar facility, the Arthur M. Blank Family Upper School. Initially, the feedback was positive from all Pace students. Students seemed especially receptive to the Correll Richards Family Terrace, the most popular destination in the entire building. “It is almost impossible to find a seat up there, especially during breaks on Wednesday schedules,” said sophomore Eric Shank, a frequent patron of this ever-bustling spot.

However, the hype has all but evaporated, and has been replaced with outrage over the technical flaws that the architectural firm obviously overlooked. The bathrooms, which only have one stall per boys’ restroom (a mistake in itself), have leaky toilets and defective soap dispensers and faucets. Students and teachers have reported that in some classrooms on the fourth floor, the academic environment has been repeatedly disturbed by deafening creaks, presumably stemming from the deteriorating framework.

The furniture in the Seaman Family Student Commons has proven to be faulty, after couches collapsed in just two weeks of use. Fires have been known to break out as if by thin air. By far the biggest complaint arises from the malfunctioning escalators, located on the left wing of the building. “It’s a senior privilege to ride them to class, so it is so annoying that we are the only senior class not to have them to use,” said senior Parkes Tesler.

It is time to question if the Arthur M. Blank Upper School was worth the millions of dollars that were poured into the project. Visitors of the campus pre-construction can vividly remember the protestors that stood faithfully in front of the Castle with signs that read “Shame on Pace Academy”. This experience has left many speculating on whether this group might have been correct. “Maybe we actually should have hired the steel union workers that were protesting on West Paces,” said Head of Upper School Michael Gannon. “I feel bad for the generous donors whose names are plastered on plaques throughout the building.”

Demolition of the school is scheduled to begin immediately following spring exams. Classes for the upcoming 2016-2017 school year are expected to be held a mile down the road at The Lovett School.