As if one state championship wasn’t enough, the Pace Academy boys basketball team marched down to Macon to defeat an overmatched Manchester team 65-43 on March 4 to win the school’s second state title this school year. Backed by a raucous fan support that has followed them all year long, Pace emerged from the tunnel in their home whites to a loud ovation. Even before tip-off, it was apparent that Pace had the size advantage in the matchup, with 6’10 junior Wendell Carter Jr. and even 6’6 sophomore forward Isaiah Kelly towering over their brethren from the East. 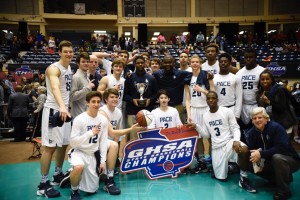 The Pace Academy boys basketball team celebrates with the trophy after their state championship win in Macon. Photo: Fred Assaf

Junior guard Barrett Baker continued his sizzling run of play in the state tournament, splashing two threes right out of the gate. Three-point plays by Carter and Baker led Pace to an early 12-2 lead, stretching it to a 21-8 lead after the first quarter. A thunderous Carter Jr. dunk and a huge slam by Kelly let the Knights hold serve in the second quarter, going into the break with a comfortable 38-24 lead.

While Pace continued building on their advantage in the third, the Blue Devils from Manchester wouldn’t go away, going on a 7-0 run at the end of the quarter to cut the lead to 47-34 and making Pace fans just a tad uneasy going into the final stanza. However, the Knights just followed the lead of Carter Jr. to run away from the Blue Devils to the win and a state championship.

Carter Jr. was the star of the night, finishing with 30 points, an astounding 20 rebounds and 5 blocks. Baker chipped in with 16 points of his own, including nine early on that set the tone for Pace. Senior Zack Kaminsky, in the last game of his great Pace career, finished with only 4 points but provided key leadership on both offense and defense. 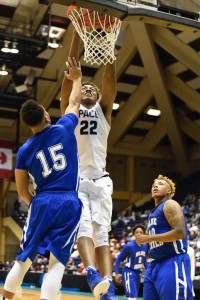 As the Knights celebrated both on the court and in the stands, a historic realization kicked in: Pace had become just the seventh team in all GHSA classifications to win state championships in football and basketball in the same school year.

Such an incredible feat could never have been anticipated coming into the year, as Pace had never before won a championship in football or basketball. “The most gratifying part of it all is the way it energizes our community, to see excellence at such a high level of achievement for more than one team is such an awesome thing,” said Pace Athletic Director Dr. Troy Baker.

While losing key contributors such as Kaminsky and his fellow seniors Mick Assaf, Jordan Harris and Kyle Orr, the Knights will return the core of their state championship team including Carter Jr., Kelly, Baker and junior starting point guard Mark Sommerville. Sophomore Jonathan Rushton will continue to play valuable rotation minutes and look for junior Deon Jackson to step up even more on the wing. Even with the impending move to 3AAA, expect Pace to mount a strong state championship push again next season.