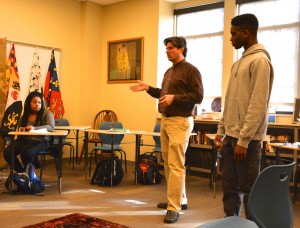 Mr. Bryan lectures his students on the correct auditioning technique for a play. Photo: Libby Sams

After an outstanding Winter Showcase in January, Pace Theatre Director Mr. Sean Bryan has big plans for the spring production, “You Can’t Take It with You.” Originally performed in 1936 on stage, and later in 1938 on film, “You Can’t Take It With You” is a lively comedy written by George S. Kaufman and Moss Hart. Its “living in the moment” vibe comes to life when lead character, Alice Sycamore, falls in love with Tony Kirby, a banker’s son. However, when she invites her pompous in-laws to dinner to receive their blessing to wed, Alice’s enormous, atypical family proves to be a little too exciting for the Kirbys.

The play’s existential message of life’s unpredictability and the importance of living in the moment, intertwined with comedic shorts of Alice’s lively relatives, will leave the audience in stitches while bringing up an important message. “I picked this play because it is relatable to all high school students in the idea that life works in mysterious ways – it is never preplanned,” said Mr. Bryan. “One can plan as much as you want, but suddenly the unexpected will arise, for example: the college process. The play also tells the audience that it is OK to be considered outside the ‘norm,’ or unique. One shouldn’t apologize for their differences, but instead embrace them.”

This uplifting show is appropriate for all ages, and is sure to be a hit. “I’m excited it’s a comedy,” said junior Emma Downey. “There have been a fair share of serious and heavy plays in the past couple of years, so I’m glad we are doing something a little more lighthearted.” The play will open April 14 and run through the 16th.