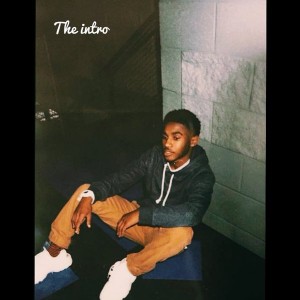 Senior Xori Johnson has captured the attention of many of his peers with his recent output of music. The picture above is the cover photo for his single “The Intro,” which debuted on Feb. 6. Photo: Xori Johnson.

Senior Xori Johnson describes himself as a lifelong perfectionist. “My primary desire was to just make high quality music,” he said. “I wanted to make sure that every song that I put out was perfect in my eyes.” From a young age, Xori has committed himself to doing his absolute best in everything he does, whether it’s in his schoolwork or his fundamentals when it comes to track and field. This chase for perfection has led Xori into a new world: the music industry. Using the stage name “EXØ,” Xori has recently turned heads with his superb product of music. Combining captivating lyricism and flow, EXØ has taken the Pace community by storm.

“I think it’s cool,” said sophomore Caleb Holifield. “Somebody has the courage to show the ‘hidden talent.'” It’s pretty inspirational.” EXØ dropped his first single in late January, which was called “1 AM in Destin.” His career took off from there. In the song, the lyrics, while being somewhat of a freelance in topic, were incredible for being a new person in the industry. In some of his other work, EXØ likes to talk about subjects that are more in-depth. “I typically like to talk about deeper stuff,” he said. “Complicated friendships, relationships gone wrong, and how my experiences with how I got better and defied the odds. For me, that’s something that drives me to be a catalyst for music with meaning.”

While the product and its enjoyment spark a pleasant feeling in Xori and his fans, the young music mogul’s process for making music is tedious and drawn out. It’s a process that he has stuck by for his short yet successful career and one that he takes very seriously. “The first thing is to find concise topics to center your song around,” said EXØ. “I then structure the lyrics around the topic. After that, I collaborate with some of my partners so we can find the perfect beat that fits the vibe of the song. It can take almost three weeks to write the perfect song.” Despite the process being tough, Xori reiterates the feeling of being rewarded with a great final product that he can share with the public. “His lyricism is pretty unique,” said senior Kyle Orr. “He’s pretty creative with his lyrics and beats.”

While Xori is striking while the iron is hot, he doesn’t exactly know how long he will continue to make music. He has talked about continuing his work on SoundCloud throughout college. Rumors have surfaced of him giving up music altogether. For now, Xori is just determined to turn into one of the best young rappers in the game. “I’m focused on making great stuff,” said EXØ. “I want to make great music, put my heart into it and have a ball.”

Xori has released some information about some upcoming work and wants for all of his fans to stay ready. “I’m working on a couple of singles that I want to drop in the coming weeks,” he said. “But as for my ‘official debut,’ I’m grinding right now. My goal is to release my debut EP in early May. Just stay tuned.”