Tennis Returns with Sights on Another Title Run 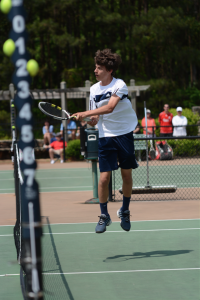 Last year the varsity boys tennis team had an amazing season but finished just short of a Class AA state championship. The second place finish was heartbreaking, but showed that the tennis team was poised for the future as this year’s team is exactly the same (minus one graduating senior, Matthew Seaman). Following a year’s time for the talented roster to complete off-season workouts, and the addition of three talented freshmen, the team is ready for the 2016 season.

The three incoming freshman are Will Funston and twin brothers Charlie and Joe Hirsch. Funston, a 6-year tennis player, is already nationally ranked and inside the top 50 freshmen in the Southeast according to tennisrecruiting.net. Joe and Charlie have both been playing for eight years and are super excited about getting the opportunity to play varsity for Pace. “It’s awesome to be on varsity; I love to silence the doubters,” said Charlie. “This year we only lost one senior and one sophomore to JV soccer. With three freshmen coming in, the odds look good that we can return to the championship and hopefully bring home the ring.”

Several leaders already have emerged following Seaman’s departure. Junior Prashanth Kumar has been elected captain and is ecstatic for this season and its potential. “Last year, people thought we wouldn’t have a chance to even make it to the state tournament after losing five seniors,” said Prashanth. “But the ‘Baby Knights’ made it farther than we had in nearly seven years.” This year, the young team has become older, wiser, and better on and off the court.

Prashanth and other upperclassmen Nicholas Kratz, Josh Nash and Ben Siegel all praised their head coach, Neil DeRosa. “Coach DeRosa is a great coach and is very smart and good at tending to each individual player’s needs and weaknesses in the game,” said Siegel.

Coach DeRosa thinks there are two main areas of emphasis that create a successful team. First, it is imperative to develop a team-first, me-second attitude. Second, and most critical, is establishing clear, consistent, positive student leadership. His goal for this season is to be able to match last season’s success, as well as to improve more from it. “Right now we are focused on getting better every day and establishing a lineup capable of winning consistently,” said Coach DeRosa. “Hopefully, that will lead to success in the region and at state.”

Almost every player on the roster has invested significant court time in the off season improving their individual skills. The combination of young talent and veteran leadership seem to be a great one for the tennis team. With several early wins under their belt already, look for the tennis team to make some noise this year.