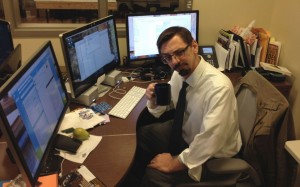 Technology wiz Matt Walker has worked at Pace for the past eight years, but few know what makes this mysterious man tick. He is a man of many layers, one who can don the stern countenance of a rugged middle school soccer coach and then seamlessly transition into the videography prodigy that we all know and love. Now Mr. Walker—coach, mentor, tech wiz, father, teacher—has agreed to give the people what they want, an exclusive interview with Knightly News.

KN: Thanks for meeting with me today Mr. Walker. I am excited to finally get to bottom of things!

MW: The pleasure is mine; thanks for giving the opportunity to talk.

MW: You know, I started working at Pace almost a decade ago as Assistant Director for Summer Programs. My wife and I moved down from Rochester, New York so she could pursue a graduate degree from Emory University. I began in the Middle School teaching teen life and eventually transitioned into the IT department after Dr. Dietz left.

KN: So what made you go into technology?

MW: It mostly happened by chance. I have worked in a lot of different areas, like the social service agency, and somehow I always became the de facto IT guy. I couldn’t avoid it even if I tried (slight chortle from interviewee). Over time I picked up a lot of the tech skills that I have today.

KN: As the former middle school boys soccer coach, what was your prior connection to the sport?

MW: I played all throughout my childhood. They say I came out of the womb bearing a soccer ball, but that might just be an urban legend. I played throughout high school, but unfortunately gave it up in college to pursue video. I still enjoy watching the game, and enjoyed my reign as Middle School soccer czar.

KN: Awesome! What do you do in your free time?

MW: I have no free time. With a four-year-old and an eight-month-old baby, I spend the majority of my free time reading stories and playing Legos.

KN: As videography teacher, what is your favorite movie?

MW: Hmm, that’s a tough question, probably “The Cabinet of Doctor Caligari.” It is such an interesting movie because when they filmed it, they flooded everything with light. Since there were no shadows, they had to paint artificial shadows on all the faces and sets. They had complete control on how everything looked. The result is an extremely eclectic and strange film that is widely considered to be the first horror film ever made.