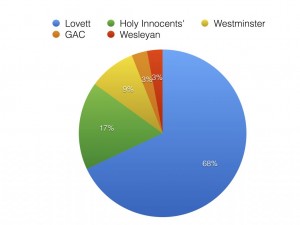 Lovett leads by a large margin in the poll, which asked students and faculty who they believed was Pace’s biggest rival school. Graph: Lee Wilson

In a recent opinion poll, Pace students and faculty were asked, “Who is Pace’s biggest rival?” The poll asked students to consider academic, athletic and artistic standards when voting.

The Lovett School won in a landslide, obtaining 68% of the votes, due to recent rivalries in both football and basketball. Other factors likely included the proximity of Lovett (roughly nine minutes away from Pace) and large number of mutual friends between the two schools. Junior Jack Wallace selected Lovett School, explaining that it was “because we both hate everything about each other, but we’re always better than they are so it’s O.K.”

The runner-up was Holy Innocents’, who finished with 17% of the votes. Given that Pace demolished the Golden Bears in both football and basketball this year, students might feel as if this rivalry is beginning to wane.

A surprising third place, Westminster got 9% of the votes. The nearby Buckhead school’s biggest rival is Lovett, and Pace rarely plays the Wildcats in sports for now (the schools will be in the same region in 3A next year) but due to Westminster’s similarly high academic and artistic standards, they prove a good rival for Pace in both of those areas. “Athletically, it’s a tie between Lovett and HIES, but academically it’s Westminster,” responded senior Lauren Pickman. When Lauren was asked why, fellow senior Reid Funston chimed in that “it’s because they’re the only other school where the students know how to read.”

Tied for fourth and fifth are current region rivals Wesleyan and Greater Atlanta Christian, who both got 3% of the votes. The two Norcross schools have proved to be challenging rivals, as both teams beat Pace in football once this year. However, due to the location issues and a lack of artistic or academic contact, the rivalries between the schools have been fairly low key.

Some students had mixed opinions on the issue of Pace’s biggest rival. “I think in terms of academics they stack up better than Lovett, and in arts I think that they’re decent, but we’re just better overall,” said senior Xori Johnson who started off by saying Lovett, but changed his answer to Holy Innocents’.