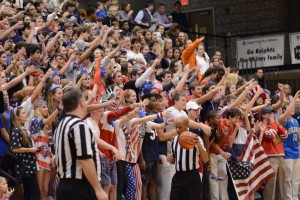 The Knights of the Round Table get ready for the game against Lovett at home on Jan. 15. Photo: Fred Assaf

The Cameron Crazies, the Orange Crush, and the Knights of the Round Table. What do these three groups have in common? They are all student sections for elite teams in their respective leagues. But with student sections comes an odd gray area of social interaction between the students and the players on the field/court.

When does a chant directed at a player cross the line from funny to insulting? Should chants ever be directed at a specific player? These are questions that head officials from their respective schools must face when their schools contain a hoard of rowdy students.

College student sections do enjoy a greater level of freedom than their high school counterparts, which leaves the Knights of the Round Table (KOTRT) in an awkward spot, searching for inspiration from the college level which can lead to some controversial chants. Some controversy over the KOTRT chants simply comes from mishearing, most recently a “Cole Smith” chant directed at the HIES guard being confused with an expletive phrase. However, there are other KOTRT practices that earn cringes from the spectators outside the infamous group.

One practice that has earned criticism has been the screaming at players inbounding the ball on the sideline in front of the KOTRT. Inspired by the Cameron Crazies of Duke University, the patrons of the front row take part in yelling at the top of their lungs at the poor soul chosen to throw the ball into play. With such rowdy fans being in such close proximity to the player, there is the chance that some interruption could happen to the game, particularly if the referee is very strict about how close the fans can get. However, as long as the crowd refrains from touching the player, there is no problem with yelling at players in order to try to fluster them.

The KOTRT have been very peaceful despite their critics. In conjunction with referees and self-policing, despite a few hiccups along the way, the student section has maintained a balance of loudness and spirit, while still abiding by the rules. Although there are always questions raised whenever a student section says anything edgy, the KOTRT have established a model student section whose lead should be followed for years to come.