Have We Become too Sensitive? 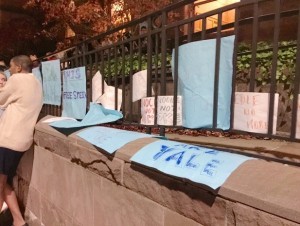 Throughout the 21st century, society has begun to accept more and more controversial subjects, taking significant steps forward in American history. The oppression of many minority groups has been called into question, particularly by the younger generations, including the millennials. While progress has been made toward achieving complete social and political equality between all races, sexualities, religions and genders, many advocates of these issues feel there is more progress to be made.

However, some of the individuals that seek these reforms are arguably overreacting to opposition to their beliefs. It seems like people want their own opinions to be heard and accepted, but ironically, they refuse to acknowledge and accept the arguments that are not their own.  This group has been nicknamed the “crybullies” because of their childish behavior.

The explanation behind the fragile feelings of this generation of teenagers and twenty-somethings seems to lie with their parents. Over the past few decades, the validation of children’s emotions and accomplishments, such as giving out participation awards and encouraging the expression of feelings, has been the trend. While this approach has the ability to eliminate exclusion and hurt feelings, some critics argue that these children are not prepared for the harsh realities of the real world.

This skepticism of trying to make life “fair” is supported by recent tumult at numerous college campuses. For example, Yale students have protested against the right to protest. This generation of radical thinkers appears to preach ideas that actually contradict their cause. Instead of seeking social changes to improve the world around them, they have accidentally promoted the restriction of our constitutional rights like freedom of speech and press.

Social media may also play a role in the behavior of the crybullies. As the first generation to grow up with the popularity of Facebook, Twitter, Reddit, Tumblr and many more platforms, these angry college students have become accustomed to publicly advocating their opinions and beliefs. I think that these young adults will continue to struggle as they realize that they have to “grow up” and discard their utopian views for societal peace. Media culture may be able to alter our approach to social and political issues in the future, but for now, the crybullies continue to wail for change.