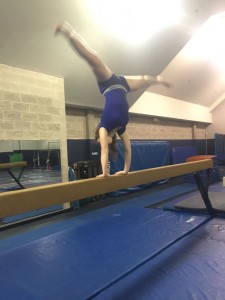 Gymnastics, often called “le sport de la mort” by its participants, is one of the most rigorous and strain-inducing sports offered by Pace Academy. It’s a big time commitment, rough on the knees, and yet so rewarding. The JV team practices at a minimum four times a week, while varsity practices up to six times a week. “Gymnastics can be tough because when we are trying to gain new skills, we fall a lot so it can be tough to get back up and try again after,” said senior Mackenzie Greenbaum. “But we always get back up.”

The girls have had great success in years past, and are hoping to keep up the team’s gold standard with a positive season. “Gymnastics is rewarding because all the hard work we put into learning new skills pays off when we perform,” said junior Lindsay Fisher.

One of the little known and most cherished traditions of the gymnastics team is the annual assignment of animals. Every gymnast receives an animal that becomes a part of her identity for the season. These animals can represent anything from their appearance to their personality. “Everybody loves getting their animal for the first time,” said junior Katy Leitz, whose animal is a red panda.

The team is known for great chemistry due to its small size. There are eight girls on the team, with Mackenzie the team’s sole senior. “The team is really inspirational and the gymnastics season is definitely one of the most energetic and fun times of the year,” said Coach Cunningham. “The girls all get along really well with each other and there is never a dull day in the gymnastics room.” The girls’ first meet of the season comes shortly after spring break on March 16.