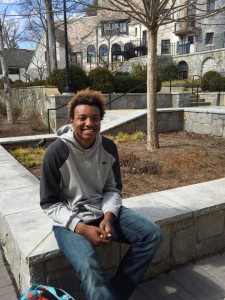 Junior Wendell Carter, Jr. has enjoyed Pace both on and off the court. Photo: Dori Greenberg

Knightly News: What’s it like to be the big man on campus?

Wendell Carter Jr.: I mean, I try not to think about it as much and try to be a student, and try not to let my head get big or anything.

KN: If you could be with any girl, who would it be?

KN: Where do you expect to be 10 years from now?

KN: If you could eat one food for the rest of your life, what would it be?

KN: Is there any particular place that you like to get your wings from?

KN: If today were your last day on earth, how would you spend it?

KN: Do you have a hard time balancing school and sports?

WC: I kind of plan out my day before it happens, so I have enough time to do both.

KN: Which professional player do you model your game after?

WC: Probably Anthony Davis. Like, he had his big growth spurt when he was classified as a point guard and now he’s a big man. That’s who I try to model my game after. It’s kind of hard, though, because he’s more versatile; he can move better than me, but that’s who I want to be at some point.

KN: What’s your most embarrassing moment?

WC: Probably when we played GAC and I tried to block some kid’s shot and he made it in my face.

KN: Anything not basketball related?

KN: Who is your favorite teacher?

KN: Who is your favorite coach?

WC: Kabeya, because he keeps me entertained on and off the court.

KN: Who is your favorite teammate and why?

WC: I have to say [junior] Mark [Sommerville] because he always looks for me on the court. Not saying that no one else does, but he’s the point guard. He has the ball in his hands more than most. He’s also really funny.

KN: Rumor has it you have a Lovett girlfriend. How come?

KN: Is it difficult to still be growing?

WC: Yeah, it starts to get real tough to find things that fit me, but I mean, I always find a way to make it work.

KN: What was it like to be in the locker room with Chris Paul (Los Angeles Clippers) a few weeks ago?

WC: It was a lot of fun. I got to see all the Clippers players and now that they’re in the NBA, I would’ve thought that they would be more exclusive and not allowing us to come in, but everyone was talking to us about summer ball and the teams they used to play for. It was pretty fun.

KN: Were the players really relatable?

WC: Yeah, especially Austin Rivers. He’s so young and he played for one of the teams in the EYBL [Elite Youth Basketball League] and he still supports them a lot, so yeah.

KN: Who is your biggest fan/supporter?

KN: How do you spend your free time?

WC: Now that I have my driver’s license, it’s probably going to change. I’m going start hanging out with friends more and you know, going out. I usually like going to the movies and playing video games, typical stuff.

KN: How tough was it losing to Lovett a few weeks ago?

WC: There’s a good side and bad side to it. The bad side is that we were supposed to win that game; we could have easily gotten the “dub.” The plus side is that we needed some adversity so everyone knows how it feels to lose.

KN: How does it feel to be less famous than (sophomore) Sebastian Bradley?

WC: (Laughs) He’s quite the character. He actually might be up there for one of my favorite teammates at Pace. He keeps me laughing if I come out of a game and I’m having a bad game, or I’m upset or something. I just take a quick glance at Bass and I’m back to a good mood. It’s crazy.