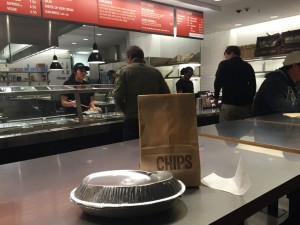 This winter has been dreary, to say the least. “It’s probably been the hardest couple months of my life,” said senior Ethan Schneider. “I feel like something has been missing.” He, like many other avid Mexican food eaters, has been devastated by the e. Coli outbreak at Chipotle restaurants across the country this winter. The fast-food burrito joint took the country by storm over the past decade as it captured the hearts of its customers. Now, after over six months of questions surrounding the safety of Chipotle’s food, the CDC has reported that the e. Coli outbreaks should be at an end.

The Colorado-based chain restaurant has become a hit with consumers ever since it began its rapid expansion. The burrito joint has loyal, and sometimes obsessive, customers like the young boy who says in a popular Vine post, “Oh my god, I love Chipotle; Chipotle is my life.” Locally, there are five Chipotle restaurants within a five-mile radius of Pace Academy, which signals a high concentration of Chipotle regulars in the Buckhead area. Lately, however, even the most loyal customers have had a dilemma: is it safe to eat Chipotle?

In a world full of fast-food Mexican options like Moe’s, Qdoba and West Paces Ferry Shopping Center’s own, Willy’s, Chipotle has always set itself apart with its motto of “food with integrity.” That slogan has been under scrutiny lately with the chain’s recent health woes, prompting reform of their safety and sanitation policies. As their public image has suffered, so have their sales. Recently, Chipotle offered customers free burritos in an effort to attract the masses back to their restaurant. The company is doing their best to recover, but it will likely be a while until they are back to pre-outbreak form.

With the recent news from the CDC that the e. Coli contamination is over, Chipotle should bounce back in a big way. Though some costumers opted for alternatives, many believe the alternatives just are not the same. “[Chipotle has] fresher ingredients, better chips with a hint of lime, better guacamole and friendlier staff,” said senior Chipotle enthusiast Darby Cochran. Although the brand is still attempting to revive its public image, consumers, including those at Pace, should not worry about visiting their local Chipotle in the meantime.