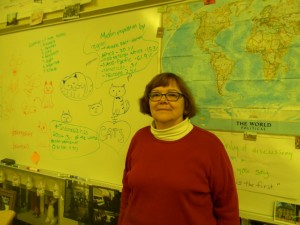 On the cold, windy days of Jan. 21 and 22, 21 brave Pace students climbed into buses and cars to spend two days at Marist High School at Model Arab League. After an opening ceremony, they entered different classrooms designated for specific councils: Arab Social Affairs Ministers, Political Affairs, Arab Environmental Affairs Ministers, Palestinian Affairs and Joint Defense. There, the students had to represent the views of the Arab country to which they had been assigned, on multiple topics.

Fortunately, with history teacher and Model Arab League sponsor Ms. Smith to provide guidance, they had already done extensive research and had written draft resolutions (papers that state what the Model League of Arab States will do in order to solve problems). “We don’t know that much about that area of the world,” said Ms. Smith. “It is an area where millions contend on a daily basis with health, gender, education and geographical problems, not just political problems.”

After the participants fully discussed their first topic, they split into groups to make draft resolutions with others who shared their views to be sent to the chair (the two persons running the operation). If the chair approved the resolution, it was allowed to be passed around the room and brought into conversation. There, the representatives of the countries would discuss its strengths and weaknesses. If there was something that the people wanted to fix or strike from the paper, they were allowed to make an amendment to the paper to make the paper stronger. Amendments could also add more information and points to the draft resolution.

The goal of Model Arab League is to understand more about other countries’ situations and to give a voice to the voiceless. It is an invaluable experience which educates kids about the world outside of Pace Academy and teaches them life skills as well. “I love how I learn to speak in public proficiently,” said freshman Michael Starr.

Although the delegates are supposed to be motivated to do the best they can in the model to improve the situations they researched, there are awards for delegates who are especially good diplomats, who contribute to conversation positively and frequently. At Marist, voting was done by writing down the name and country of a delegate who deserved an award. Seniors Aaron Davis, Payton Gannon and Ethan Robinson; junior Misha Andra-Thomas and sophomores Jeb Carter and Jonathan Tennies all won individual awards. In addition, the Qatar delegation won an outstanding award.