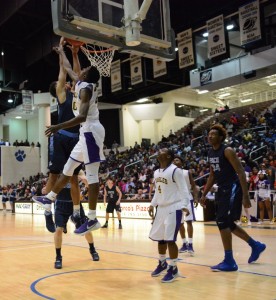 Sophomore Isaiah Kelly (in blue) throws down a dunk over William Jarrell of Crawford County in the GHSA Final Four. Kelly had 20 points on the night. Photo: Fred Assaf

After Friday night’s blowout win over the top-ranked team in the state in AA, Thomasville, Pace Academy had less than 24 hours to get ready for an equally talented opponent in the #2 Crawford County Eagles. Despite the short turnaround and the raucous Eagle fans that enveloped the Centennial Center in Milledgeville, Georgia, the Pace varsity boys basketball team defeated Crawford County 61-51 to advance to its first-ever state championship game.

The Knights forced a Crawford timeout early, as they raced out to a 9-1 lead early in the first and led 13-7 after one quarter. Pace looked primed to repeat Friday’s blowout and assert their dominance against two of the top teams in the state.

However, Crawford County did not give up. Led by some tenacious defense, the Eagles climbed back into the game by pushing the tempo and attacking 6’10 Pace junior big man Wendell Carter Jr. in the paint. Just as it looked like Pace would go into halftime with a slight lead, Crawford County’s William Jarrell pulled up from beyond the arc and drained a 3-pointer to give Crawford County a 25-24 edge at the break and sending the traveling Eagle fan support into a frenzy.

Not to be fazed, however, Pace leaned on their experience to stay focused coming out of halftime. Sophomore standout Isaiah Kelly led the Knights, slamming home several big dunks while dominating on the offensive glass with Carter. After Crawford County came back to tie the game at 36, a Kelly 3-point play in front of the Knights of the Round Table put Pace back up by three. Junior Barrett Baker, who put up 17 in the quarterfinal win against Thomasville, ended the third quarter with a driving layup to put the Knights up 46-38 going into the fourth.

Crawford County tried to fight back in the fourth in a last-ditch effort to get to Macon, but every time the Eagles scored Pace answered right back. Carter hit a pair of free throws before senior guard Mick Assaf pulled up and hit a clutch jumper in the lane. With 1:30 remaining, Carter rose up and slammed home a dunk, accentuating a pair of monster performances in Milledgeville and punching Pace’s ticket to Macon.

Isaiah Kelly played the star for Pace, as he led the team in scoring with 20 points and finished off a double-double with 11 rebounds. While he didn’t pour in the points, Carter stuffed the stat sheet with 15 points, 12 rebounds, 4 blocks and 3 assists on the night. Senior Zack Kaminsky finished with 13 points, including three 3-pointers, and junior Barrett Baker poured in nine, increasing his total to 26 points over the two weekend games.

After the game, the Pace contingent flooded onto the court as the Crawford County fans filed out. The Pace fans found a sign lying around from the Eagles fans that said, “WE DON’T LOSE TO PRIVATE SCHOOLS.” Several students scooped it up and started taking pictures with it, and even Pace Headmaster Fred Assaf took a picture with it in a pondering pose.

Thanks to Pete Pope and Kyle Sandy/sandysspiel.com for all stats.