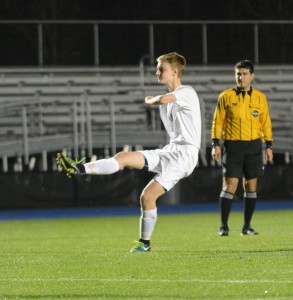 The spring season brings into play many successful Pace sports teams. The boys soccer team, having lost only one senior from last year, has great confidence going into this year’s season. “Expectations are very high for this season,” said senior Mark Handler. “I don’t like to predict how we will do because it is too early in the season, but obviously there is one main goal.”

The team this year is packed with upperclassmen and no freshmen. The squad only has three sophomores, all of whom were members of last year’s Final Four team. The experience level will make it easier for senior captains Mark Handler and Johnny Reece to guide this team through the season. “Having a bunch of players on the team with a lot experience makes expectations for this season extremely high,” said junior center-back Sammy Lettes. “There is a great amount of talent on this team, and everybody trusts everybody else to make the right plays.”

The players also enjoy an immense amount of banter on and off the pitch. “My favorite part of the soccer season is definitely the banter,” said sophomore Nate Reece. “There is never a dull moment during practices and games.” Although many members of the squad contribute to the banter, one name is associated as the source of banter more than anyone else: junior Brian Sloan. “I’d have to give the funniest player [award] to Brian Sloan,” said Mark. “He is sort of just a goofball, so I never know when to take him seriously.”

In their first official match of the season, the boys soccer squad defeated Pinecrest Academy by a score of 6-1. The team controlled the pace of the game throughout both halves, and the defense shut down Pinecrest’s offense. Senior Ethan Robinson netted three goals, Johnny netted two goals, and senior Hobie Malik netted the last one. The boys then defeated rival Atlanta International School (AIS) in their second game of the season by a score of 2-0. Ethan scored his fourth goal of the season along with Hobie, who scored his second. As of Feb. 26, the mens varsity soccer team is 4-0.